It was week 3 in France and New Zealand 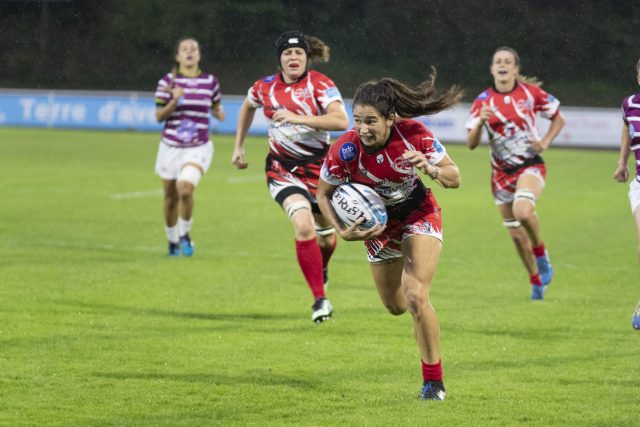 Match of the round in Week 3 of the Farah Palmer Cup Counties was undoubtedly Counties Manukau’s trip to Eden Park to take on Auckland.

This, the final match of the weekend (and, curiously, one of just two games not televised – which shows some odd choices by the TV schedulers) saw the visitors beat Auckland 36-22 – a result that leaves Auckland facing some unexpectedly hard work to do to claim a playoffs berth from a North Pool where Counties and Waikato are setting the early pace.

Waikato went three wins from three but had it far from their own way at Bay of Plenty, winning a tight game 21-10. It took them 14 minutes for the first points in the game to come, winger Stacey Fluhler  finishing off a nice team attack, while Cheyelle Robins-Reti bagged a brace of tries later in the first half, helping her team get a 15-3 lead at the break. The only try in the second half came from Bay of Plenty’s Mererangi Paul in the 64th minute, catching a long pass out wide from Alena Saili.

In the South Canterbury and Wellington are setting the pace. Canterbury showed their attacking intention when they scored their first try after an Otago mistake 69 seconds into the game, before repeating the trick after only 22seconds of the second half. By the end they had scored 13 tries in an 85-10 win.

Otago best moments ironically came when their prop Eilis Doyle was sin-binned, resulting in uncontested scrums from which Canterbury infringed which was enough to set up Rosie Kelly to make a blindside break to score.

Amy du Plessis also scored for Otago, but aside from this it was all Canterbury, wing Martha Lolohea strong on the left wing and captain and blindside flanker Alana Bremner being rewarded with two tries, Bremner scoring hers within two minutes of each other.

Taranaki made up for their second round loss to Waikato by beating North Harbour 32-29 in a tight contest, both teams scoring five tries apiece and the difference coming from Gayle Broughton's penalty goal.

The final quarter of the game were hectic. North Harbour were in front 17-13 but Iritana Hohaia reclaimed the lead for Taranaki in the 60th minute, only for Clementine Varea to put North Harbour back in front six minutes later.

Then Broughton scored and converted her try with seven minutes left. But North Harbour refused to lie down, Amy Robertshaw crossing with three minutes left. However, the home side claimed the win two minutes into injury time when Chloe Sampson scored.

Manawatu made light work of Tasman's challenge in an 88-0 win in Palmerston North.

Despite the relaxation of COVID rules one more match was added to the list of postponements, Grenoble and Bobigny sitting a second weekend out in three.

The weekend marked the midpoint preliminary phase of the new structure, and Montpellier, Bayonne and Romagnat look well set to reach the Championship phase after going three from three with wins against all of their pool rivals. Montpellier in particular have racked up 220 points so far, conceding just 21, in their three games in Pool 1 dismissing La Valette 64-9 this weekend.

Bayonne top Pool 3 but, having beaten leading rivals Blagnac last week, they struggled away to Chilly Mazarin. The lead repeatedly changed hands Chilly’s new signing Shannon Izar gave them an early lead from a penalty, Pauline Boudon’s quick thinking from a penalty put Bayonne in the lead 7-3, Chill retook the lead through Coralie Bertrand. A rainstorm changed the nature of the game before Bayonne prop Yaurena giving her team the lead 12-10. The downpour continued in the second half, the only points coming from a penalty from Boudon giving Bayonne a 15-10 win.

Romagnat beat Bordeaux 20-9 in Pool 4 in what was Stade Bordelais’ first game of the season after two postponements.  In fact there have only been three games played so far in this pool, all wins for Romagnat.

Pool 2 is topped by Rennes, despite their losing 23-14 to Toulouse. Stade Toulousain have a game in hand and are just a point behind. Even so, these two look well set to qualify the pool, as expected.

It is Pool 1 that is far less predictable after Lons beat former Top 8 titans Lille 31-21 in Lille. The Northerners have yet to score a point in this year’s Elite 1 and have an uphill struggle to qualify for the next stage.