Experienced radio broadcaster, Barney Burnham, has worked regularly for Sky News Radio, for ten years, reading and writing news and sports bulletins. He is the regular match reporter for the London Wasps website, to which he also contributes extensive audio interviews with players and coaches. 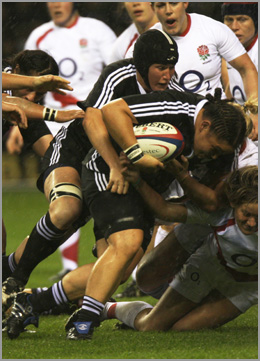 On a rainy night at Twickenham, in front of around 10,000 enthusiastic supporters, the two best sides in the world produced an enthralling game, which was worthy of a far larger crowd. It was a great advert for the womens game and, by some considerable distance, the best of the four autumn internationals seen at HQ. Although I watched the first womens game to be played at Twickenham a cup final, back in the eighties, I think Ive only attended about half a dozen in total, including just one international, in which England slaughtered Wales at Old Deer Park, a few years ago. The last women's game I'd seen live had been Wasps against Worcester, four or five years ago. What I saw at Twickenham tonight was way above the standard of anything Id seen women produce before.

Its a pity that the conditions were so poor, as they made handling a lottery, and prevented the game from becoming a classic to match the previous meeting between these two side, in the last World Cup. As it was, a magnificent display by the home side earned them a 10-3 win, which ended New Zealands run of 24 successive international wins, and gave them only their third ever defeat. For England, it was sweet revenge for that World Cup final disappointment, and their first triumph over the Black Ferns since a historic win in Auckland, in 2001

Anyone who had not seen a womens game before today could not have failed to be impressed by the rugby on show. Everything you expect from the game was there, but there was more ambition than weve been seeing in much of the mens game for some time

We saw two sides whose first instinct was to move the ball through the hands. Yes, there was kicking the conditions dictated that but it wasnt the aimless aerial pingpong which has blighted the mens game for the last couple of seasons. There was tactical kicking of the highest quality from Englands flyhalf Katy McLean, who put in a series of beautifully placed diagonal kicks to keep the Black Ferns pinned down.

For obvious reasons, we did not see the juddering, bone-crunching collisions which punctuate the mens game, but that didnt mean it wasnt a physical affair. From England, we saw some powerful scrummaging - which would have raised the eyebrow of former England prop Jeff Probyn, who was once, notoriously, less than complimentary about the womens game - and some excellent lineout work. From New Zealand, some impressive driving mauls, which could hardly have been bettered by the All Blacks. From both sides, committed defence and a willingness to run the ball.

There were some big units in both packs, and there was no shortage of big hits, but they tended not to be the flying, chest-high crashing tackles which are causing so many injuries amongst the men. We also saw less of the annoying ruck clearance, where players not connected to the ruck or maul are routinely smashed out of the way but the breakdowns were still fiercely competitive

This was full-on rugby, with both sides registering over 100 tackles many of them from Englands inspirational Maggie Alphonsi, a dynamic flanker who plays like a female Serge Betsen.

The one area where womens rugby has traditionally lacked the skill of the men has been kicking. The first few times I saw women play, the kicking was abysmal both from hand, and at goal. I remember seeing Worcester thrash London Welsh once, with Nicky Crawford running in try after try most of them between the posts, but (if my fading memory is still functioning) none of them converted. Nowadays, that particular skill has been taken to a much higher level, and the drop goals slotted by McLean and her opposite number Rebecca Mahony, who possess an educated left foot, would have earned nods of approval from the members of the England and All Blacks sides who paid the women the great compliment of standing in the rain to watch them

The only try of the evening would have graced any match, and was a reminder that you can score from first-phase ball. England won a lineout on the right, and first worked it round the front, before releasing it to the backs. Neat work in midfield with more than a hint of blocking sent prop Claire Purdy thundering through a gap. She made more than 20 metres, before feeding left winger Kat Merchant, who took play into the 22. When it was recycled, Englands other impressive flanker, Heather Fisher, made a powerful charge before losing her footing a few metres out. Quick recycled ball a rarity in the mens game saw McLean flick it out to skipper Catherine Spencer, who powered her way over for a score which was far better than anything the Twickenham crowd had seen in this months previous three games.

Merchant and Fisher both featured in another superb passage of play, which almost brought a second try. Early in the second half, Merchant gathered a loose ball under extreme pressure, just outside her 22. You just know that Englands men would either have gone to ground, or hoisted a long kick downfield, but Merchant decided to chance her arm. She managed to evade the oncoming tacklers and found the space to set off on a superb 40-metre run which took play up to the New Zealand 22. A couple of phases later, Fisher showed her speed in an angled run which was stopped right on the line, where she was penalised for not releasing. Again, this was rugby with an enterprise and ambition which Martin Johnsons side has consistently failed to produce.

Mention should also be made of the haka. It began in a rather more gentle way than were used to , but built to a thrilling conclusion, with the New Zealand side advancing on their rivals, to end up eyeballing them, in a manner which brought back memories of Richard Cockerill and Norm Hewitt, back on the Tour from Hell, in 1998.

There was so much to enjoy in this game, which put so many recent mens matches to shame but, for me, the best thing of all was that we saw players with smiles on their faces. Well done to both teams, who showed why womens rugby is now one of the worlds fastest-growing sports. When I first watched top-level womens rugby, it was played by a mixture of real rugby players and those who looked like girlies bravely trying to play rugby. Those days are long gone. The modern game is played by skilful, dedicated athletes who have raised their sport to a new level, but are clearly enjoying themselves. If only we could see smiles like these on the mens faces.

Next year, the Womens World Cup is being held in south-west London, between August the 20th and September the 5th. New Zealand and England are currently the top two sides in the world, and few would bet against them meeting again at Twickenham, in the final. If the late summer weather smiles on us, we could be in line for some more superb rugby, which will serve as a potent reminder of just how far the womens game has come.

For more images of the game check out our Flickr page here.