The second round of results in Europe’s World Cup qualifiers has thrown up a thrilling finale next weekend, where wins for Ireland and Scotland mean that all four teams go into their last games with a chance of winning a place on the plane to New Zealand. 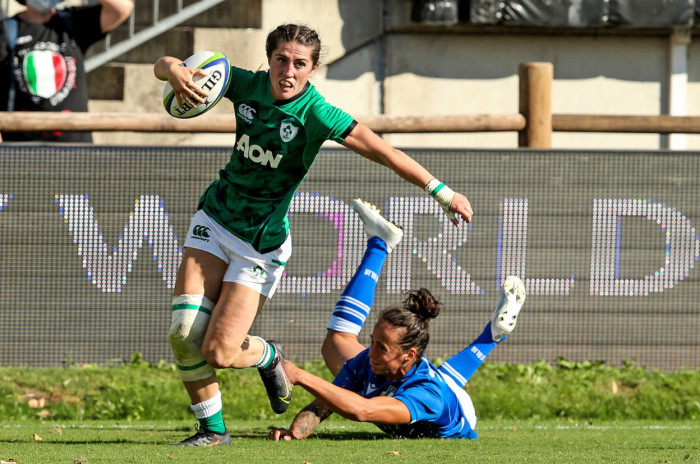 Ireland’s hard-fought 15-7 win over Italy and Scotland’s terrific 27-22 win over Spain means that all four sides end the weekend on five points going into the third and final round.

Points difference is now all that separates the sides with Italy (+17) in first place, closely followed by Ireland (+7), Spain (-4) and Scotland (-20).

If the teams finish level in the table at the end of the final games, the result between those team counts first, then points difference, then tries.

Ultimately the final round will be knockout rugby. Whoever wins each game will win a place in the World Cup or a place in the final global qualifier, which you would expect the European team to win comfortably.

Though Ireland had beaten Italy on 17 of their previous 19 meetings, Italy went into this game on home soil as slight favourites after their excellent win last weekend over Scotland.

It was a cagey affair with little to separate the teams for most of the game, with Ireland’s defence impressing and Italy’s run it from anywhere approach bringing some reward, but also running them into trouble over the 80 minutes.

Ireland, with Linda Djougang impressive with ball in hand, were struggling early on at set piece, but their patience paid off when finally they did secure a dominant lineout in Italy’s 22 and a brilliant catch and drive created space for Stacey Flood to put Beibheann Parsons over in the corner.

Italy came charging back and it took a try saving tackle from Ciara Griffin to stop Lucia Gai from scoring and the teams turned around with the score at 0-5.

Ireland lost Eimear Considine to the sin-binning for tackling Michela Sillari high, but their defence was excellent again with Eve Higgins forcing a turnover penalty.

Italy then burst into life and punished a poor kick when Manuela Furlan tore through the middle of the field and linked up with Beatrice Rigoni who finished brilliantly.  Michele Sillari added conversion from wide on the left.

Minutes later Rigoni was binned for a deliberate knock-on and Ireland pressed the accelerator.

First Flood kicked a penalty to regain the lead, then Parsons gathered a poor kick for touch and blazed through several defenders. Quick ball was ferried out to the right where Aimme Murphy Crowe had the pace to score and Flood's conversion put Ireland eight ahead and that was enough.

The lack of a bonus point could well come back to haunt Italy – they’d be leading the table tonight had they managed to convert just one more of their many opportunities.

This was a huge result for Scotland, who had all been but written off after their loss to Italy last week, and when Spain scored in the opening minutes, Scots fans must have feared the worst.

But not only did Scotland keep their dreams of World Cup qualification alive, they did it having trailed at half-time and with a four-try bonus point.

It took Spain less than two minutes to find a way through the Scottish defence as Amaia Erbina profited from a set-piece move to score under the posts.

Patricia García converted but Scotland grew into the match and found themselves in the ascendancy when they scored two tries in three minutes midway through the first-half.

The first was finished by Rhona Lloyd from close range, her second of the tournament, and from the restart her team-mate on the opposite wing, Megan Gaffney supplied a stunning finish from much further out.

Lisa Thomson claimed an impressive catch to start the move and having taken contact the centre found Gaffney on her shoulder and the winger beat Garcia to score. Helen Nelson added the conversion and Scotland led 12-7.

Spain lost full-back Lea Ducher to injury soon afterwards, however, they did not let that set back affect them as Marga Rodriguez came up with the try that put them back in front.

A stunning offload from Erbina close to the Scottish goal line then gave María García the space to score as Spain built a seven-point lead.

However, a period of Scotland pressure on the stroke of half-time ended with Nelson cantering over from close range. The fly-half missed the conversion, though, to leave her side two points adrift at the break.

Paula Requena had been shown a yellow card for an infringement in the build-up to Nelson’s try, but Scotland were only able to add a penalty from their fly-half in the time the Spain winger was off the pitch.

García added three points of her own as Requena came back on, but despite their best efforts those would be the last Spain would score.

Monica Castelo was shown a yellow card for a high tackle in the 57th minute, and while the replacement second-row was in the sin-bin Scotland scored the match-winning try.

Rachel McLachlan was the player who came up with the ball following a powerful driving maul that confirmed a try-scoring bonus point. Nelson added the conversion.

Spain did all they could to find a way back into the contest, but the Scottish defence held firm to make sure all four teams head into the final match-day with a chance of securing qualification.