Touchline reports from Day One of the final Women's Sevens World Series tournament in Amsterdam. 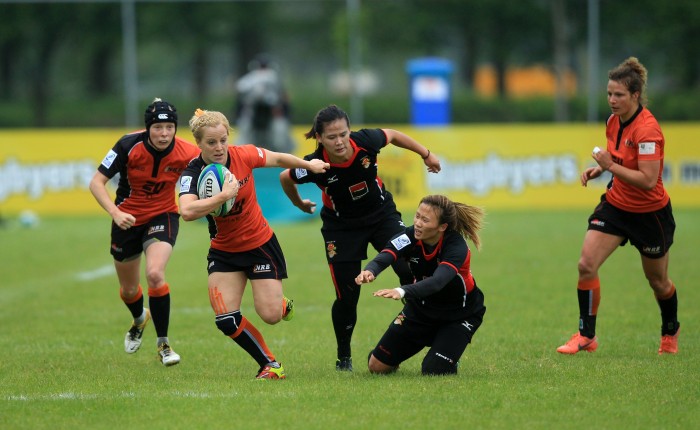 On a cold and cloudy day in Amsterdam, the final round of the Women's Sevens World Series started with Australia taking on Spain, in Pool C. The same two teams opened the London Sevens six days before, but apart from that there was no comparison. A fast, confident, talented Australian team were far superior to the Spanish, who were barely able to get out of their own half in the first half. It was 12-0 at half-time (tries from Alicia Quirk and Emilee Cherry) and that was extended to 31-7 (tries from Tiana Pentiani, Maddy Elliott, and Evania Pelite for Australia, Elisabet Martinex for Spain) by the end, with tries from across the Australian team. Spain had a better second half, but the absence of Patricia Garcia seemed to make a huge difference.

Pool C continued with USA and Brazil, and another fairly one-sided game. Brazil were always going to struggle in this pool, but their chances were not helped when they lost two players - one almost certainly for the rest of the tournament - within the first four minutes. To add insult to injury, it was while the second player was down and being attended to that the second USA try was scored - Brazil playing for several minutes with only six players. In the end an easy 24-0 win for USA (two tries from Ringgenberg, plus tries from Marchino and Folayan).

Next Pool B and a great game between England and South Africa. The South Africans have a good record against England, and within a minute they were ahead when Gadu broke through the middle to score, a lead they held until half time despite an England try from Natasha Brennan near to half-time. The second half was even better than the first, Alex Mathews sprinting 80m to put England ahead, (12-7) only for Gadu to drag things back for South Africa with a great break down the far side (12-14). Gadu is a hugely talented player, both with hands and feet - and neat piece of dribbling with a loose ball got her out of trouble when isolated later in the half. England now put huge pressure on the South African defence, and in the end it told with a third try, this time from Ruth Laybourn. So, 17-14 to England, who will breathe a huge sigh of relief in getting through a tough match.

If that was a close one, the next was even closer. A totally different France (in every way) from last week took on Canada - and shocked them with their adventure and commitment from the start. The opening half was almost deadlock as a result, the arguably more talented and certainly more experienced Canadians being frustrated at every turn by French determination - and that brought its reward when Fanny Horta went over at the end of the half. The kick was missed, however - which nearly proved decisive as Canada converted their try (Mandy Marchak) early in the second half. But the French came back, and as the hooter went, won a penalty just to the right of the posts. They turned to Le Duff - who had missed a similar conversion kick earlier - but she did not miss this, giving the game to France 8-7.

Finally Pool A, and Russia rocked New Zealand at the start, and early try from Svetlana Usatykh putting the Russian ahead. Rattled, the New Zealanders initially made a raft of handling errors which, fortunately for them, Russia could not capitalise from. They regrouped, ran through the phases, kept possession,and equalised on half-time with a Tyle Nathan-Wong try. The second half was rather more a New Zealand affair, and with two more tries (Honey Hireme and Portia Woodman) and New Zealand took the game 17-5.

And so the home team, Netherlands, with a crowd of schoolchildren behind them (and a fair few adults) now took on China. Speed versus strength as the result and in the end speed was the winner, but it was not that easy, only a single Kelly van Harskamp try separating the teams at the break. Two more tries (Anne Hielckert and Annemarie van Rossum) in the second half extended things to 19-0 at the end, but it was a battle.

Pool C began with an almost routine win for Australia against Brazil. They were 14-0 up at half-time with tries from Shannon Parry and Saofaiga Saemo and they rolled on to a 24-0 win with two more in the second half, a result that will see them into the quarter-finals alongside USA, who beat a Spanish team that is still looking a little flat. Two tries from the brilliant Victoria Folayan , plus another from Kelly Griffin were enough. Again Spain woke up a little after 10 minutes had gone - but the game was out of reach by then. Berta Garcia scored a consolation try.

The pool to watch remains Pool B - another great game, this time England against France - who are playing better than we have ever seen them at Sevens before. They totally frustrated England for seven minutes until Abigail Chamberlain broke away to score from the final play. France were soon back in it, however, with a well taken try from Jade Le Pesq - the only survivor from London. There now followed five minutes of classic sevens, both sides throwing everything into the game. It needed a moment of magic to break the teams, and we got it from Ruth Laybourn, who scored one of the tries of the tournament so far, sidestepping half the French team, one-by-one, before sprinting 60m to the line to score. England won 12-5.

In the second Pool B game Canada blew South Africa off the park. Playing at their best, with great handling and brilliant lines, they scored six tries to to South Africa's one. Admittedly, the South African try was pure genius from Gadu dancing through the Canadian line to keep South Africa in the game at 17-7 at the end of the first half. But the second half was all Canada - 36-7 the final score.

It was now New Zealand's turn to rattle up a textbook win, this time over China in Pool A. Honey Hireme set the tone in the first minute, and Alexis Tapsell doubled the score before the break. As we noticed last year when China were in London, they love to kick when trapped in their own half - it's a debatable tactic as it invariably just results in the ball being run back, relieving pressure for only a few seconds. The second half was a close copy of the first, Hireme and Kayla McAlister scoring and New Zealand coming away 24-0 winners.

Finally on came the Netherlands, against Russia - and the form the Russians showed in the opening game continued. This time, however, Baizat Khamidova starred - and single-handidly popped the home party balloon. A great breakaway try, out-sprinting even van Harskamp, she scored in the second minute and - despite having most of the possession - there was no way through for the Dutch. Then, right at the start of the second half Khamidiova did it again, With the Dutch throwing everything forward, Marina Petrova broke through on 12 minutes to score a third for the Russians and finally, to add salt to the wounds, Khamidiova completed her hat-trick from the final play. 22-0, and some shocked and disappointed faces around the ground.

Australia and USA opened the round with a battle for the top of Pool C. And the USA were overall the better side, Vanesha McGhee in particular has had a good game, as we have come to expect from her - as one spectator said as she scored her first try, "that looks familiar". Kelly Griffin came agonisingly close to a second a few minutes later, cutting through the Australian line like it was not there before being brought down inches from the line. Australia battled, but in the end experience just about told. Much of the first half was at the Australian end, but the Australians pulled level at the start of the second period (Nikki Etheridge), but a second try ftom the USA on 12 minutes was enough to win the game.

Spain now came out to play Brazil. Both without wins, there was an outside chance as long as whoever won did so by a big score. It was deadlock for the first five minutes, but hen Laura Esbri broke through, adding second a minute later. Now 12-0 up, with Esbri also kicking well, Spain realised a quarter final place was possible. Within a minute of the restart Ana Rial was over, and then a Esbri scored a vital try to complete her hatrick. Spain won 26-0 - a vital 26 point margin.

England now played Canada in Pool B, and had a great game. Arguably not as strong as last weekend, the team rose to the occasion. Ruth Laybourn scored another magnificent try, An 85-90m run from out of her own defence. Canada seemed to lack the freshness of their earlier games, or England did not let them play. The second half was scoreless until the final play, but played mainly at the Canadian end. Claire Allan ended the game with a second England score. 14-0, and England finished 3rd seeds for tomorrow.

South Africa began with an outside chance of making the quarters, but needed a two-try win. That seemed possible when Jordaan touched down after 3 minutes. But in a long period after the hooter Julie Billes pulled France level, and a Le Duff conversion put France ahead. So, it was back to stage one - and South Africa had several chances to go ahead again - but French defence kept them out, and then Jade Le Pesq battled through to put the French ahead with only a minute left. Tash Hofmeester score a consolation for the South Africans, but it was not enough. France won 14-12, meaning a game with England tomorrow.

And now came the crucial game for the home team against New Zealand. They could lose, but by no more than six points. The first half was astonishing - lasting nearly 11 minutes, both sides totally committed, and the final play went on and on, each team hoping for that crucial score. In the end it went to New Zealand through Sarah Goss, but the kick was missed - so the Dutch hopes still lived. And so the deadlock continued into the second half, but crucially the game remained at the Dutch end making any Dutch mistake potentially costly. And so it came - a ball again not quite going to hand (the Dutch passing was their major flaw in this game) and Portia Woodman was in. Netherlands now needed a try to get back on terms, but instead it was Woodman popping up for a third try on the far side - and the Dutch were out of their own tournament.

The final game now mattered little, unless the Chinese were going to beat Russia - which seemed unlikely. It was. Five tries to nil, Russia strolled to a well-deserved quarter-final place.

And so tomorrow its New Zealand v Spain (9.30 BST, 10.30 local time); Australia v Russia; England v France, and USA v Canada. Frankly - other than maybe the first one - any of those could go any way. China, South Africa, Netherlands and Brazil will compete for the bowl.