Zimbabwe have been playing international women’s rugby since 2005, but - despite a long rugby tradition in the country - they have rarely managed to finish higher than fifth or sixth in continental championships. However a long-awaited women’s rugby league will be established next month, which aims to uncover talent that will strengthen their team. 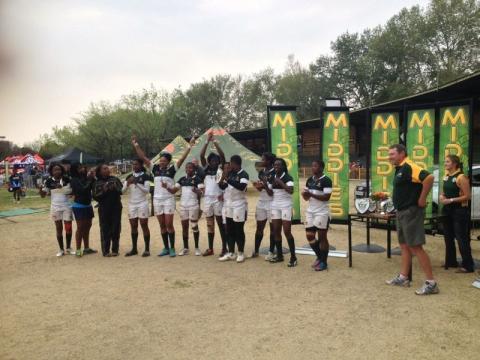 ZRU vice president, Nyararai Sibanda, said each province had been told to form a 10-a-side team for a speedy implementation of the national league and competition was expected to begin next month.

Since 2002, the provincial teams have only been used for schools rugby and used as the scouting ground for the junior U-19 Sables squad during the annual national trials tournament.

“The introduction of the league comes as part of our efforts to promote a women’s version of the game,” said Sibanda. “We will also soon introduce provincial sports officers, with those recruited being put under the union’s payroll for the period 2014-2016. This is meant to drive rugby development from grassroots all the way to club level.”

Apart from a single test match against Zambia back in 2007, all of Zimbabwe’s international rugby has been sevens. As a result the choice of 10s as a format initially seems odd, but it does suggest that the ZRU have ambitions beyond purely sevens and may be aiming to join the continent’s small but growing group of test teams. Although there are no international competitions at 10s, it is a format that has been used by some unions to try to achieve this end.

Manicaland is one province that has already begun its trials, in order to prepare a strong squad for the national league.

“We have reintroduced provincial senior and junior teams and spread the game at ward level in the high density suburbs,” said provincial team coach Hebert Wushe.

He was confident that the early preparation and a broad player base would make a strong case for the province when it finally takes on others in the national league.

Meanwhile, Sibanda said the ZRU had also reintroduced provincial senior and junior teams, with the inaugural play-offs set for Bulawayo during the Easter holidays.

“Just like in the old days, every province will field a team of both seniors and juniors (Under-19) to represent them. We hope to use this format to scout for and sign up more talented players from all over the country,” he said.

“At the 2016 Olympic games to be hosted by Brazil, Sevens rugby will be added as an Olympic sport for the Under-19’s, so this will also be a building up structure for our junior side, apart from the Cottco Games and the traditional schools national trials.”

The potential for a successful “Lady Cheetahs” team (as the sevens team is now branded) is evident from their success at the 2013 Middelburg 7s where they beat a number of South African club combinations on their way to the title, conceding just one try in the process. By broadening the base from where the team is selected the hope is that they will start to achieve more success at an international level as well.

Sibanda revealed that the target for the new structure will be the qualifiers for the 2016 Olympic Games are set to be held in May 2015 in Gaborone in Botswana. In the meanwhile the current Zimbabwean team will compete in this year’s African championships, to be held in Kenya in April.