France gained revenge for their shock defeat to Italy last year with a dominant display at Stade Ernest-Argeles, in Blagnac, recording a 29-0 win in a game that they controlled from start to finish. 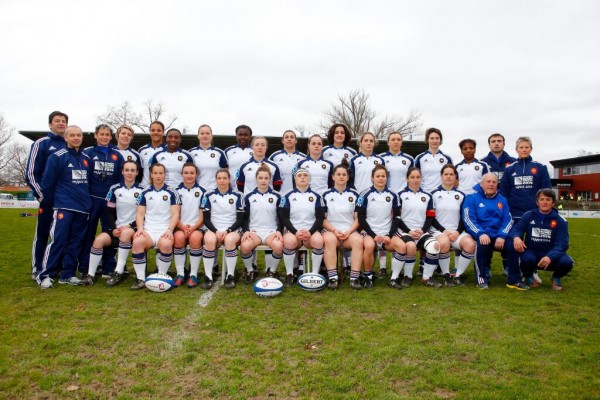 France - on their way to their first title since 2005?

Italy - winners away to Wales in round one - are a team growing in confidence and ability, and the held out against a tidal wave of French pressure for over 20 minutes in the first half before finally succumbing.

In front of a near-capacity crowd of at least 4,000 in Blagnac continual French pressure finally got its reward when back row Djossouvi finally broke through on 23 minutes. The 5-0 advantage at half-time did not tell the story of the game to that point, and the danger that Italy might turn the game around as they had at Port Talbot the week before remained.

However the turning point of the match came on 50 minutes when the French back line was given room to run and with a well worked passing move sending wing three-quarters Marion Lievre in for the second score. Le Duff again failed to convert, but the 10-0 scoreline had opened a gap.

This was extended 10 minutes later when referee Claire Hodnett finally lost patience with the Italian defence and awarded a penalty try for repeated infringements by the Italian scrum. Le Duff converted in front of the posts for 17-0

Two more scores followed on 69 and 75 minutes as forwards Arricastre and Koita extended the lead still more, with Tremouliere adding a conversion.

France's largely Montpellier pack (five out of eight are from the Top 10 champions) is becoming the hero of their Six Nations so far, with six of their seven tries in their opening two games coming from this powerful unit. On the other hand, France's kicking problems seem to be returning. Agricole missed three kickable penalties and a conversion in the first half, which allowed Italy to stay in the game.

"We have held up well for the entire first half", said Italian coach Di Giandomenico after the game.  "For 60 minutes it went very well. But we could not hold out against their physical prowess and in the end we succumbed. Our playing defense was satisfactory but we have to learn to manage our possession better, and especially not to waste the chances we had and go up the field with better efficiency. Overall I feel happy with the way we played, even if the defeat was heavy . "

(All replacements were tactical, except for that of Maria Cioffi who was injured)