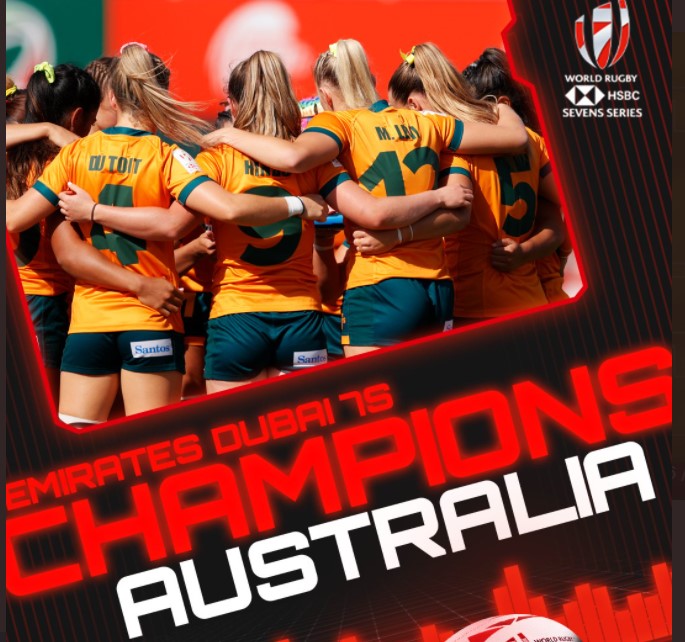 Skipper Demi Hayes led her Australia squad to yet another gold medal after a pulsating final against the Fijiana. Alysia Lefau-Fakaosilea thought she had opened the scoring, running a great line, but the Fiji defence got back and put her off as she knocked the ball over the try line. Faith Nathan did give them the lead with an unconverted try three minutes before the break. Nathan then set-up Madison Ashby for a crucial second unconverted try to make it 10-0 after seven minutes. Fiji knew they needed a strong start to the second half - and they certainly got it. Reapi Ulunisau scored a five pointer for them less than a minute after the interval and when Lefau-Fakaosilea was yellow carded for Australia with four minutes to go things had got very interesting.

However, it was Australia who managed to score next with six players, Lily Dick going over so close before the ball was recycled and Ashby went over for an unconverted effort. That gave them a 15-5 win and Nathan was named the HSBC player of the final. After the final, Hayes said:  “We are stoked, we came to Dubai to win two tournaments and that is what we have done. We knew that Fiji are a physical side, so we tried to play with width and move them around the pitch and we battled really hard.

Nathan added:  “I am so happy, this team have worked so hard over the last fortnight and we can build from here.”

Earlier in the day Australia had made sure of their place in the women’s final and topping Pool A with four wins from four by defeating Russia in a classic tie 26-17. The Russians led 17-7 at the break thanks to tries from Marina Kukina, Alena Tiron and Daria Noritsina, but the Australians added to their first half try from Madison Ashby in a cracking second half showing. Faith Nathan, Charlotte Caslick and Dominique du Toit went over and Sharni Williams was on point with the boot to give them the win. A couple of ties earlier, Fiji had made sure they would top Pool B with four wins from four as they saw off France 17-12. Alowesi Nakosi was the player leading the charge in that game with two tries.

It was a repeat of last week’s bronze medal match in the women’s competition as France took on Russia - and in the end the result was the same too. Shannon Izar’s try opened the scoring for France and then a brilliant team move saw Camille Grassineau getting their second. Jade Ulutule converted both and it was 14-0. A brilliant offload from Séraphine Okemba then put Ulutule in for a third converted try and the French were in control at half-time. Things got worse for Russia when Daria Noritsina was yellow carded and Valentine Lothoz scored France’s fourth try soon after. Russia did not give up and Noritsina scored a late try, but France came out on top 28-5 to give them yet another podium finish.

After the match, Okemba said:  “I am very proud of the team. We were disappointed to lose the semi-final against Fiji, but we regrouped and played well in this game. It is nice to win another medal and we are excited to see what we can do in 2022.”

Elsewhere, USA edged out Spain 7-5  - Alena Olsen’s conversion proving crucial - in the fifth place play-off to make sure they finished in that spot. Ireland defeated Canada 26-12 to end up in seventh while, after a tremendous tussle with Great Britain, Brazil beat Great Britain for ninth - unexpected results for teams who had performed so well on the first weekend. In that play-off match Thalia Costa led the way with two tries.

The circuit now takes a Christmas break until they return in Malaga, Spain, from January 21 to 23.