Five of the Six Nations teams, plus Spain, Sweden, Canada, Germany and (for the first time ever) the Barbarians are in action over the next few weeks. 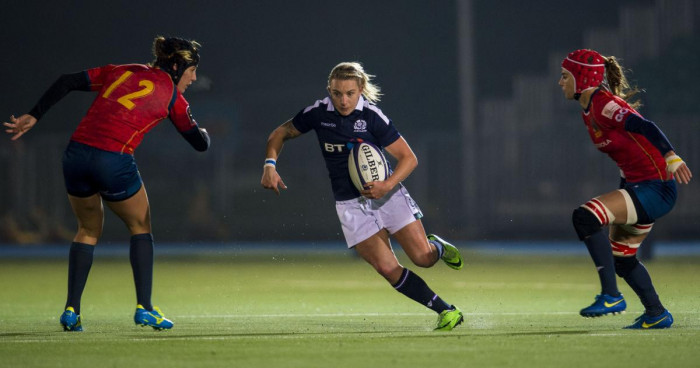 The story so far…

We have already seen a three-game tour to England by a South African XV, a promising performance by the Czech Republic, and Finland and Sweden celebrating the return of test rugby to Scandinavia.

Scotland return to test rugby having missed out on the World Cup, and take on the team that ensured they’d spend the summer at home – Spain.

Scotland are taking the game very seriously, calling up their four professional players, including the Lille trio Jade Konkel, Chloe Rollie and Lisa Thomson, plus Edinburgh University’s Sarah Law and Lisa Martin, fresh from her recent move to DMP Sharks.

Spain include 12 World Cup players, along with 8 new caps in a squad lacking most of its sevens stars, as well as experienced players Ángela del Pan, Vanesa Rial, Carmen Perez and Aora Gonzalez who have all announced their retirement.

Scotland will play against Wales in a “competitive training fixture” during at the end of a training camp (16-19 November).

For the second year, Wales' main Autumn game will be against the UK Armed Forces, who will include Welsh flanker Sian Williams as captain of their team. The game takes place on the same ground as the first ever recorded women's rugby match - Cardiff v Newport - played 100 years ago on 16th Dember 1917, also in support of the troops then fighting in France.

"At the time, the minds of the players would have been on the 245,000 dead, wounded or missing allied casualties lost at the battle of Passchendaele that summer," Sian Williams says. "There is a lot of history behind this fixture as the game was played to raise money for War Charities, just as ours is today. The beauty of the game is that we can go head-to-head against a fierce opposition and still unite at the end and remember what really matters."

Also in the UKAF line-up is Wales centre Gemma Rowland (Army) and England hooker Amy Cokayne (RAF), both of whom were recently in action at the Women's Rugby World Cup.

Wales: To be announced

See this article for details about this historic match

With France not calling up their sevens players, and also missing three leading players who will be with the Barbarians the day before, this is an interesting chance to look at a young French team with many faces likely to become more familiar over the next four years.

Nonetheless at least half of the squad has signfiicant test experience, with Romane Menager returning after her impressive World Cup performances, and the familiar sight of Safi N'diaye likely to be playing at no. 8. Young Pauline Bourdon also gets a chance to return at scrum-half after impressing in France's Six Nations win in 2017.

If you are unable to get to see England v Canada in north London on Friday evening, you will be more than welcome at Imber Court in south London on the same evening when Sweden's newly reformed test team play their second autumn "international", having beaten Finland at the end of October. The Swedish squad includes three players based in the UK.

British Police: To be announced

Just before the final whistle is blown at Imber Court, the first game in a three-test series between England and Canada will kick-off a few miles north. England take on Canada at Allianz Park (17 November), Twickenham Stoop (21 November) and Twickenham (25 November).

Simon Middleton named his squad for the series last week. Although players in the seven squad are not included, her was still able to call upon 18 players from the World Cup in his 28-strong squad, which also includes seven uncapped players - Jo Brown, Jess Breach, Abigail Dow, Zoe Harrison, Ellie Kildunne, Caity Mattinson and Lagi Tuima.

Canada's main change is that of coach, following the depature of Francois Ratier. Pending a permanent appointment Sandro Fiorino has been named interim coach for the series. Fiorino is not an entirely unknown, however, as he has been assistant coach of Canada's women's sevens team since 2011, helping head coach John Tait and the team win bronze medal at the Rio Olympics. He has also served as head coach of the women's under-20 side. Rugby Canada says it will review the entire women's program after the England tour and decide on a full-time coach - and Florino has said he would be interested in the job.

There will be some changes from the World Cup with players such as Kelly Russell and Karen Paquin announcing their retirement. The final squad has yet to be announced, but Fiorino, 45, says he expects to be taking a "very young, eager but inexperienced team" to England.

Interestingly, one of his specialties is talent identification. Fiorino spotted Ghislaine Landry a dozen years ago at a high school tournament, so his squad could include some unexpected names.

As mentioned above, Scotland and Wales are due to meet in an unofficial training fixture at the end of a joint camp, held in Scotland. No further detailshave been announced yet.

After being the only European World Cup team to not have any autumn internationals last season, Italy return to the fray this year with a home game against France.

Italy have yet to announce their team, but it could be significantly different to that which played in Ireland after the retirement of so many players from that squad.

The French squad is expected to be similar to that for their game against Spain (see above).

The autumn international season ends in Germany this year with the recently revived German team seeking to reverse their narrow 25-29 defeat in January. Squads have yet to be announced.