A real game of two halves in Parma ended for England with their biggest win against Italy for over a decade, despite the hosts dominating possession in the first half. 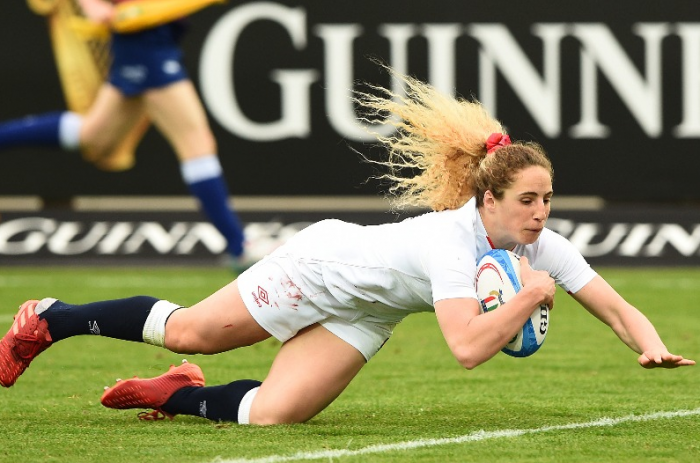 Italy had over 60% of the ball in the first 40 minutes,  and so - despite some impressive turnovers achieved by Amy Cokayne and Sarah Hunter - it was very much against the run of play when England went ahead after 22 minutes.

A rare handling error saw a pass go to ground, and Emily Scarratt was on hand to pick up the ball, and then sprint away to score under the posts.

Eight minutes later and we had a repeat of that first try, this time Megan Jones was on hand for the loose ball. The only main difference was that Jones was tackled just before the line, but Vicky Fleetwood was on her shoulder in support to score to make it 0-14 after 30 minutes.

An exchange of penalties – which included a yellow card for Scarratt – ended the opening 40 minutes with the score at 3-17.

England extended their lead early in the second half, first through a penalty and then from a try by Abby Dow, diving in at the corner from a quick pass from an England maul after a long period of pressure.

A yellow card against Italy then put England well on top and more tries started to flow.

Alex Matthews shook off five challenges to set up Harriet Millar Mills after 58 minutes, followed two minutes later by Helena Rowland, finding gaps in the Italian defence,  and then two minutes after that Dow swept down the touchline for her second try. The score was 3-48, with half of the second half still to go.

Italy were no sooner back to 15 before a second yellow card for prop Erika Skofca ensured Italy would play the final 10 minutes a player down, and from the first play after the card an England maul put Bryony Cleall over, and the English lead was over 50 points.

Claudia MacDonald and Lark Davies added two more scores in the final two minutes, and England were winners by 67-3 – their biggest win in the fixture since 2008, thanks to a second half performance that was in marked contrast to the first.