The Black Ferns have eased away from the Australian Wallaroos to the tune of 37-8 at Eden Park, thus taking the Laurie O’Reilly Memorial Trophy series 2-0. 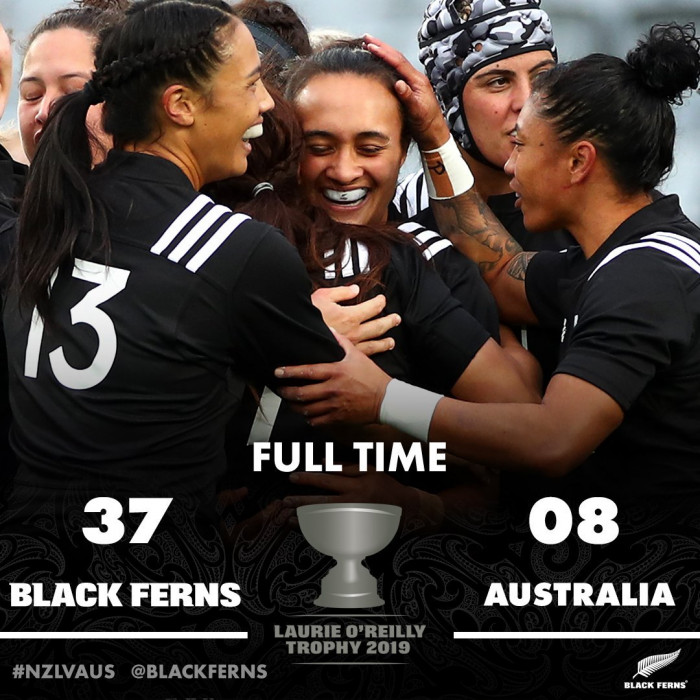 They might not have been "bullied" but the Wallaroos have learnt there is still a fair margin to be bridged if they are to beat the best in the world. Despite a much-improved physical effort, the Wallaroos were kept them scoreless in the second half after a competitive first period.

Working off a dominant scrum, the Black Ferns sought to bring more physicality to their work, but the Wallaroos were not backing down in that area, creating some early niggle between the packs.

But it was Black Ferns first five Ruahei Demant who split the Wallaroos’ line with a shimmy off the left foot to open the scoring after barely three minutes.

The Wallaroos, who had far more starch in their defence than in the first Test, hit back soon afterwards when wing Mahalia Murphy scored a tremendous solo try, fending off Selica Winiata and Renee Wickliffe in the process. The visitors presented a far slicker lineout and were again up for the physical battle, but they met an equally determined home side.

Ferns No 8 Charmaine McMenamin was again in prime form, and was player of the match, carrying strongly and hitting with power on defence. She set up lock Eloise Blackwell for a try with a subtle inside ball.

But Australia had a sniff of an upset at halftime despite trailing 17-8 at halftime at Eden Park but they could not go on with it to register their first ever win against the Black Ferns.

However the second spell saw the Black Ferns exert real pressure which told with three tries. Centre Carla Hohepa ran a gap out wide, while Demant set up McMenamin with a nice dart. Chelsea Alley was a handful in the No 12 jersey.

The Wallaroos lineout faltered late in the piece, meaning we saw few chances for the talented centre Alycia Lefau-Fakaosilea to show us her offloading ability.

Canterbury’s Grace Brooker made a pleasing debut off the bench, running with gusto and involving herself in the action from the fullback position.

All the Black Ferns will be back in action in a fortnight when the Farah Palmer Cup provincial competition kicks off.

Wallaroos coach Dwayne Nestor has faith in his squad full of "untapped talent" to compete with the best in the world despite a 37-8 loss to the Black Ferns.

The Wallaroos were held scoreless in the second half but Nestor was proud of his charges' response to last week's 47-10 drubbing in Perth.

"I'm actually pretty proud of the girls because we didn't get bullied this week, there's probably just some one percenters that we've got to get better at and we've got the opportunity to work on that next year," Nestor said. "They're a quality team. They are the no.1 ranked team in the world for a reason. The good thing is that we get to play them twice a year (again) next year and that's a great opportunity to play the best.

"If we want to be up there with the best we've got to play the best. The Test match program for next year looks great for us, it's going to give us the opportunity to play the top five team in the world, so that's where we want to be."

"We're starting to settled on a pretty strong squad. Obviously we've got our eyes open for any talent we can pick up in the meantime. But we have faith in these girls. There's some talent there that's pretty untapped and it's our job as coaches to make sure we get the best out of that talent."

"I was really proud of the girls, I think you can see the improvement over the last week," Hamilton said. "We really lifted for each other and you can see how we're playing top-level footy and the improvement in us. We're a young growing team and the Black Ferns have spent a lot of time together.

"My messaging to the team after the game was: 'We stay united, we stay strong and we come together and we work hard in the off-season because we want to be here and we want to compete and we ultimately want to win'."

They had already retained the silverware by virtue of their 47-10 victory last weekend in Perth, but they looked amped to perform in their sole home Test of the season.