Italy's fine form continued with a 29-27 win over Ireland - their first win over the Irish in the 6 Nations and a victory that took them to the top of the table on Saturday. 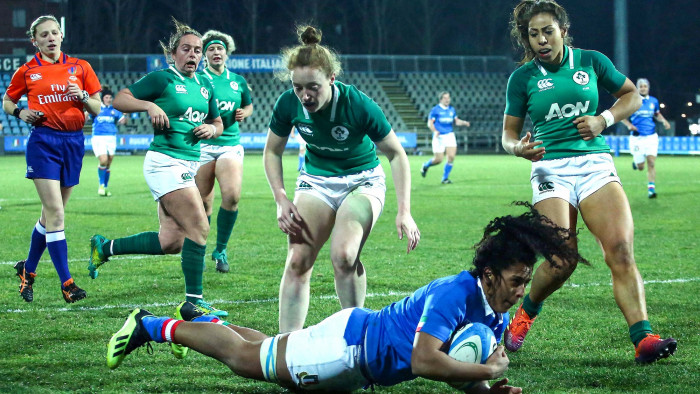 After a win over Scotland and the draw with Wales, Italy persisted with a style that is becoming highly entertaining to watch and they were rewarded with a bonus point win in an end to end game.

Italy's first win over the Irish in the competition has been a long time coming, but given their improvements in recent seasons, it was always a matter of when and not if.

With a core of experienced players, like Manuela Furlan, Michela Sillari and Sara Barratin running the backs, and the explosive Giada Franco adding real power up front, Italy - minus any real sevens distractions in recent season, and with a settled coaching team - are surely the most improved team in world rugby.

Franco scored two tries in the match to underline her emergence as one of Europe's leading players, and while Ireland were never out of the game by any stretch, it was a well deserved home win.

The game started well for the hosts thanks to Sillari's early penalty swiftly followed by Aura Muzzo's brilliant try.

Furlan cut through the visitors' defence, finding the dangerous Franco who superbly offloaded to the excellent Muzzo to finish.

Ireland hit back almost immediately through the impressive Eimear Considine, before Italy extended their lead through Franco's first try of the night.

Considine responded once more, intercepting a poor pass to race clear, with fly-half Nicole Fowley nailing the conversion and a further penalty to bring the Irish within two points.

A remarkable first-half turnaround was complete when flanker Anna Caplice bundled over following a break from Considine, but Ireland's euphoria was to be shortlived – Sofia Stefan crossing in the corner to send the two sides in level at 22-22 the interval.

Franco was to the fore again in the second period, grabbing her second try on 50 minutes but again Ireland hit back when Laura Sheehan collected another excellent cross-field kick from Fowley to reduce the deficit to just two points again.

But Italy held on.

The result will be bitterly disappointing for Ireland, despite the good performances of Considine and scrum half Kathryn Dane. Their defence was particularly poor at times though that is not to take away from Italy's scintillating attacking play and they did manage to take home two bonus points.

Italy will go into the final games against England and France with nothing to fear, despite knowing both of those games will be a huge step up.  With France at home in the final round, they are more than capable of finishing second.

Ireland head coach Adam Griggs said afterwards: "Bitterly disappointed. Our defence really let us down and it's been something that we've been working on. You can score all the tries you like in a game of rugby, but if you don't make your tackles and you don't defend and you don't get up off the ground with urgency, a good side like Italy are going to punish you and that's what they did to us.

"We're still building and we're a work in progress. That's something that we have some inconsistencies with unfortunately. We'll focus on one thing and get that right and then we forget about the other thing, so that's a part of the building process obviously. We want to be more consistent with what we're doing well and then keep those improvements coming.

"Unfortunately tonight we let that slip. Italy's defence was really solid tonight and it took a lot for us to break it down to even get our tries on the board. It was always going to be a dog-fight to the end and Italy did well to come out with it. We don't have long (until the next match), I guess that's the beauty of rugby - you've got to get back on the horse and go again.

"We'll regroup, we've got a training camp next weekend that we'll go to and try to rectify those mistakes, and then bring on France. It'll be another big test for us back home in two weeks' time."