As expected, NSW Waratahs have reached – and will host – the second Super W final on 7th April, where they will meet the winner of a playoff between Queensland and Brumbies 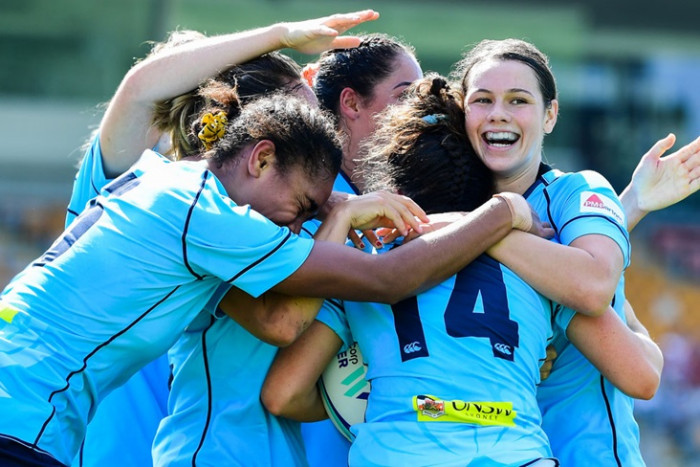 The NSW Waratahs were predictable too strong for the Melbourne Rebels (who end a second season winless), with Shanice Parker running in four of NSW’s 10 tries. There were positives for Rebels, however, with a defeat that was nothing like as big as the early season losses, and even scored two tries in the first half.

One other positive from the game was that it brought the rain to Bathurst in the drought-affected Central-West NSW but that also dampened the scoring down in the second half.

The Waratahs lead 40-12 at halftime and added four more tries in the second half - two through reserve hooker Melissa Fatu, ending with a 66-12 win, a 100% record, and hosting right for the final which is likely to be played at Leichhardt Oval in central Sydney on Sunday, April 7.

They were three tries up within the first 10 minutes. Maya Stewart scored inside the first 90 seconds from a kick and when Evelyn Horomia and Arabella McKenzie crossed soon after.

But the Rebels scored their first try when Ash Hewson fumbled a pass and it landed in the arms of Tyra Boysen-Auimatagi, who raced 50 metres to score. Hewson made up for thet with a try of her own shortly after before Shanice Parker added a brace. Even so the Rebels scored a second try right on halftime through centre Tangata Tupou.

The second half saw a big storm hit Bathurst and handling errors piled up, making for a scrappy end to the game.

"It is really great after last year to be hosting the final again,” said NSW skipper Ash Hewson. "Playing at Leichhardt Oval a couple of weeks ago against Queensland it was a really great atmosphere and a standalone game as well. So to get that crowd was amazing and hopefully we can double it it and get some support for the final."

In the weekend’s second game Brumbies came out as narrow winners of a game against RugbyWA that was effectively a straight eliminator for next weekend’s “semi-final” against Queensland.

RugbyWA had scored first in the opening minute with Claudia Neilson collecting a slick outside pass to dot down in the right hand corner, but Brumbles were soon back in the game when Georgia O’Neill ended a multi-phase play and then took the lead after Remi Wilton barrelled her way over just before the quarter-hour. Most of the rest of the first half was deadlock until Brumblies’ Tayla Stanford powered stretch their advantage to 12 points at the break.

A series of Brumbies penalties – including a yellow card - kept WA in the game but they were unable to turn that advantage into points. Prop Brooke Mason finally broke through with her the side's second try but by then there were only three minutes to go and Brumbies were able to hold on to win the game 17-12.

Brumbies captain Shellie Millward was proud of her side's efforts: "It was a bit scrappy and we're forced to go away from our game plan at times," she said., but RugbyWA captain Tara Reed was "gutted" by the result but urged her team to believe in themselves after just missing out on finals for the second year in a row. "I really thought we could do it but we just didn't quite have it in the end. They just really need to believe in themselves. We've got talent, heaps of talent, they just lack that confidence in themselves, so going into next year, I just want to say (to the team), just believe in yourself and go hard."

The Brumbies will take on Queensland on Sunday April 1 at Ballymore for a place in the final.

At the end of the pool phase predictably most of the star players have been from Queensland or NSW. Queensland’s Lori Cramer finished as top points scorer (42 points in four games), while NSW’s Shanice Parker ended top try scorer with six. Almost all of the leading attackers were from the two sides – Grace Hamilton, Ashleigh Hewson and Ilseva Batibasaga from NSW and Alana Elisia, Samantha Treherne and Alsia Lefau-Fakaosilea from Queensland topping the tables for carries, kicks from hand, passes, defenders beaten, assists and clean breaks. The only exception was from Brumblies’ Tayla Stanford who gained the most metres and achieved the most successful offloads. In defence Grace Hamilton also achieved the most turnover, while Tara Reed from WA made the most tackles over the four games.