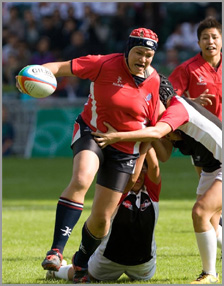 Stephen Grantham is the President of the Guam Rugby Football Union and proud supporter of womens rugby in Guam. He attended the recent East Asian Games and writes this follow up to our story on December 7. He blogs reluctantly and generally only at the request of the site editor..!

Let me introduce the improving Guam outfit and expand on their performance at the East Asian Games.

The Guam womens rugby sevens Team who played in the 2009 East Asian Games held in Hong Kong on December 5 and 6 were: Jennifer Farley (captain), Cera Taguacta, Kayla Taguacta, Tiffany Tallada, Amanda Mesa, Danielle Quenga, Deidre Weakley, Nina Peck and Rosae Calvo. Yes, we travelled to this tournament with a squad of only nine but we were determined to show that we were not in this prestigious tournament just to make up the numbers.

The tournament was played as a round robin on Day 1 with Guam facing Hong Kong and Japan before facing the formidable Chinese team.

Guam overcame some strong resistance from Hong Kong in match one and surprised them and the home team fans by coming out on top 14-12 as result of fine tries by Kayla Taguacta and Tiffany Tallada. Match two saw the Japan team, smarting from an early 24-0, 4 try drubbing by China, prove too clinical for Guam running in 8 tries to blank the Guam team 50-0. In match 3, Guam again conceded 8 tries to the champion Chinese team and fell 46-0.

The results of Day 1 saw Guam in third place with an opportunity to play for Gold if only we could get the better of Japan (placed second) in the first of the semi-final matches. Coach Hetaraka spent the night reviewing the tapes of the earlier Japanese match (remember 50-0!) and was convinced he saw a crack in their armor a tendency to play the same switch move repetitively. He devised a simple plan expect the switch and tackle the third girl!

We started out strong and surprised the Japan team with our enthusiasm and hard tackling especially in shutting down the switch move. The game went to the break with Japan leading only 7 5 with our try scored by Tiffany Tallada following strong running by Cera Taguacta. We started the second half with continued pressure on the Japanese line. Cera Taguacta took a tap penalty, attacked the Japanese defense and offloaded to Tiffany Tallada who again crossed the line only to be called back for an infringement in taking the kick. The Japanese withstood further periods of pressure before scoring two breakaway tries to seal the match 19 5 and advance to play China in the Gold Medal match.

We faced Hong Kong in the Bronze Medal match and, despite the heart break of the earlier match against Japan, continued our improvement and held Hong Kong to 15 0 in the final game.

Coach Willie Hetaraka was thrilled with the ladies performance at the tournament. We bought a small squad, both in numbers with only nine players, and in size - with an average height of 5 feet 3 inches (160cm) and weight of 135 pounds (62 kg). What these young ladies lack in physical stature, they more than make up for with sheer determination and pride in Guam. They put their bodies on the line for Guam in the Semi-Final against Japan and came within a few minutes of being in the Gold Medal match. No coach could ask for a greater commitment and effort. I am very proud to have been a part of this team.

We did not achieve our goal of taking a medal but these nine young women can hold their heads high. In front of a crowd of 12,000 people, they showed that a small island the size of Guam, with a population of only 175,000, can produce players that are able to match up with the best in Asian Womens Rugby Seven s.