The real battle is for second place. 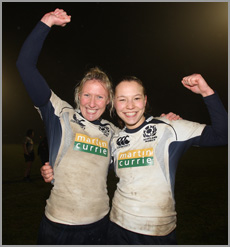 Despite Scotland (pictured celebrating) contributing the opening round shock of the womens rugby 6 Nations when they beat France in a glorious home win last Saturday, the battle for this title is as straightforward as ever.

While it would be disrespectful to the other teams in the competition to say that England have sewn up the title already, it is certainly hard to see Gary Streets side finish anywhere but at the top of the table now that they disposed of Wales - their main threat for the throne.

Any thoughts that France could have presented themselves as likely contenders were pretty much dispelled at the weekend as they went down to Scotland and though they could recover with some convincing wins in the coming weeks, it seems implausible that theyll be able to overturn England in the last game of the competition away from home.

Unless England fall apart in one of their upcoming games not likely against Italy this weekend and they should be too good for Ireland in match three despite closer games between the two in recent years the real battle in this competition is for second place.

Though this has been the case in the womens 6 Nations for a number of years now with England ahead of the chasing pack, unlike previous seasons, the prize of second place will be of much higher value in a World Cup year, offering the team that gets there vital momentum going into a summer of preparation.

Also unlike previous seasons, this year its conceivable that the second place contest is not just between France and Wales, but now Ireland and Scotland are in the mix too.

With those four teams all facing each other this weekend, the destination of the second spot in the table should become clearer next Monday.

If Wales can beat Scotland with a convincing performance then theyll be confident of overturning France at home before travelling to Ireland, but neither game will be easy.

Scotland will be on a massive high after last weekends result and if they could follow it up with a win over Wales, a side they havent beaten since 2005, then their season would really be motoring, but can they put together back to back wins?

Frances loss at the weekend confirms that they are as unpredictable as ever and you couldnt rule out a big win this weekend on home turf against Ireland.

The Irish have never won in France and though they beat them last year for the first time ever, this game will be far more of a challenge, with the French reeling from their opening round loss.

All eyes will be on this weekends results.