A tournament that captured the imagination 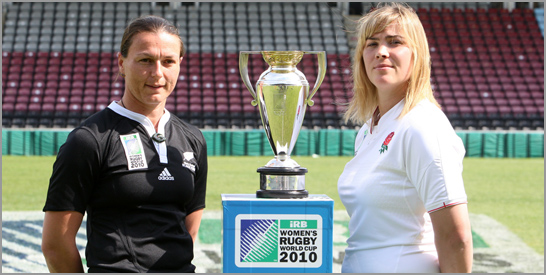 In the weeks to come therell be plenty more time to reflect on what might have been for everyone involved in Englands bid to wrest the World Cup out of New Zealand hands, but now is a much better time to reflect more simply on a tournament that has truly captured the imagination.

The dejected but admirably upbeat England coach Gary Street said it best after the final whistle when he told a room of reporters that this World Cup has changed the face of womens rugby forever.

Anyone who has played any part in this World Cup from players, to fans to administrators will know that there was something very different about this competition compared to any of its predecessors.

The interest and exposure the game has been getting in the UK media particularly has surpassed expectations especially in the build-up to the final - and Sky Sports provided an excellent tournament package for those following the action on TV.

But this tournaments success can be judged on more than just media coverage. The buzz and atmosphere surrounding the womens game is unquestionably now at a massive high with England and New Zealand proving model ambassadors on the pitch for the sport .

I almost already feel sorry for whatever nation has to follow on from Englands excellent hosting. The IRB has not made a decision on where the competition will be held in 2014 it has extended the deadline and well find out next May but whoever will take it on will have a hard act to follow.

The womens game is at a real juncture in its international development now. The IRB have been handed a massive platform to build on and theres plenty of work to do.

It must find a way to bring more nations into the World Cup qualifying process and it must surely also consider making the World Cup a 16-team tournament. This competition has thrown up some classic matches but three pools of four teams always seems a little tough with absolutely no room for mistakes as Canada found out to their cost in their off day against France.

The IRB has also got to find a way to ensure there is incentive for some of the newer nations not to defect to the 7s game completely to keep the 15aside game thriving and the sport undoubtedly need more regular competitions for the likes of New Zealand, Australia and South Africa.

It's not all up to the IRB of course - individual unions need to look at the success of this tournament and the feelgood buzz the competition created and remember why it's worthwhile investing in women's rugby.

For the NZRU that's a particularly pertinant point - the union has been rightly criticized for cutting funding for the women's game but with the Black Ferns returning home with the title there are high hopes that that trend can be reversed.

For every nation the question about how they can catch New Zealand and England will also be pressing. The two countries were streets ahead of everyone else but those thoughts are for another day.

This World Cup has been a game changer. No laurels must be rested on.