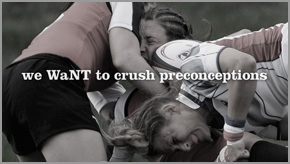 The USAs launch recently of a dedicated website promoting their national womens rugby team as well as increasing efforts to engage with fans through social media, point the direction in which PR for the womens game should be headed.

With the Womens Rugby World Cup fast approaching, the USA womens team management have rightly recognised that now is the best time to get maximum exposure for their team.

Thats one aim of their great new website www.wewantrugby.com with the other being an effort to raise more funds for the national team and its players, who despite support from their union, are still forced to dip heavily into their own pockets every year to play for their country.

The website is a simple idea but a hugely effective one and already shows up the efforts of the other major womens teams. The site includes all the kind of information youd expect on a national team website but rarely get, as well as some tongue in cheek videos which show the players away from the rugby pitch always a nice touch.

The new USA website also connects with fans through social media services, Facebook, Twitter and Flickr and the project, managed by the tireless Alex Williams, is supported by a superb film by award winning director Amanda Micheli, as well as contributions by a number of dedicated volunteers.

Canada, are probably as good as the USA when it comes to this kind of promotional work, with Meghan Mutrie and Doug Crosse delivering the goods week in week out with a well updated Facebook page, and home womens page on the Rugby Caanda site with videos, social media apps and great interviews.

In a digital age and with limited budgets for promoting women's sport, it makes sense for womens rugby to be promoted through good social media work and strong online offerings. No-one expects unions to spend fortunes promoting womens rugby through normal advertising channels the money and returns simply are not there so why dont more teams use cost effective digital PR opportunities?

Blogs, and most social media apps are free, video easy to upload and web articles no problem to get online quickly.

England, who will host the World Cup this year, have plenty of strong online offerings, though they can be hard to find in one place. Their joint World Cup Facebook effort with the IRB is well updated and very useful for fans and the RFUW offer lots of multimedia offerings after games, which we use regularly here.

But those charged with promoting womens rugby and national teams need to start using slick digital media like this much more effectively.

Relying on mainstream media to promote the game on its own is a non-starter and whats surprising about an initiative like the USA' is that other teams havent done it sooner.

Its not rocket science and putting everything in one place is sensible. And it's so easy to set up and manage social media accounts that it's frankly amazing that so few national unions take advantage of the chance to promote their minority teams to real effect. Sure the USA website did require an investment, but with running costs of a good site relatively low once you set up, it's worth far more than getting the odd hit in a Sunday newspaper.

I know how hard it is to track down not just information on teams but any contacts or details at all online about who to contact or what some national teams are planning. I'm sure thousands of women's rugby followers around the world are equally as regularly frustrated when they find nothing online about how their team is progressing.

Promoting sport it not all about getting a big hit in a national paper or a TV station - it's on ongoing effort and must be backboned by solid communications to the players and fans support the game year in year out.

As we know through our own efforts at this website there is a real appetite for information about national teams and how they prepare for big games and competitions.

By leveraging social media tools and applications amateur teams in particular stand to build stronger fan loyalty, and not to sound too worthy (bear in mind I am passionate about social media and my day-job is in full time PR and Communications) using all of these tools in an integrated way, makes it far easier to deliver consistent information for the rugby community to learn and engage with.

Here's hoping for more on this front in the years ahead.

Some good digital efforts by international women's teams. (in my opinion - feel free to add your own, not just 'women's web pages' but good examples of places which are updated and engaging.