Welcome news from the IRB 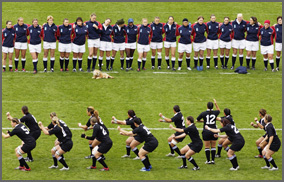 With less than 100 days to go to the Womens Rugby World Cup the IRB has confirmed that, as well as Sky Sports broadcasting 10 matches, there will be additional highlights and match streaming coverage via their official tournament website.

The IRB will stream the same 10 games that will go out on Sky Sports in the UK and as they are planning to use Skys feed, web watchers can be guaranteed high quality packages.

For me thats almost better news than the fact that Sky will broadcast a range of games, as fans outside the UK will get a chance to watch the tournament in some guise.

There may also be other avenues where non UK-based fans can watch the World Cup as I understand that there are ongoing negotiations about rights access outside the UK which may see other broadcasters come into the mix.

Although we dont know for sure yet what games will be live with Sky, we can safely assume that both semis plus the final will go out, and also that Englands three pool games will also be in there. That means that there are potentially four other pool games available live and free on the web though like I said the definite games are yet to be announced.

At last years Nations Cup, Rugby Canada did an admirable job in attempting to broadcast every match live on the web and though there were some technical difficulties, it was a job well done.

Advances and exposure like this - especially on TV - are massive boosts to the women's game, especially in the UK where the early games will go a long way towards securing a big crowd for the final at the Stoop, which would look fantastic with a full house.

***Elsewhere The RFUW are continuing with their legacy programme with 24 legacy projects have already been completed with a further 17 planned, seeing over 1,300 participants across the country experience one of the worlds fastest growing womens sports.

The legacy programme has also provided a substantial number of volunteering opportunities ahead of the tournament, including the provision of a pool of 150 volunteers committed to the continued development of Rugby for women and girls long after the final match of the tournament.

***Finally my friend and fellow womens rugby website editor in the USA Wendy Young has asked me to mention that shes started a USA Rugby Calendar on her site which you can access here. A great resource for all you US based players.