We bring you the latest offering from England star Alice Richardson who looks ahead do the Sevens World Series fresh from a series win over New Zealand. Richardson played in all three tests against the Black Ferns but now switches her attention to the 6-month build up for the Sevens World Cup in Moscow. 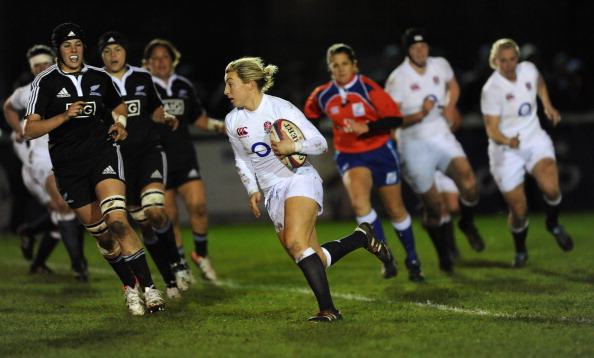 It was an amazing three test series against New Zealand this autumn, coming away with a clean-sweep. For me personally, it was a great experience to be part of a winning squad, especially after being on the side-lines for most of the 2011 test series due to injury.

It's great to get the opportunity to play three matches each season against the Black Ferns because both teams are currently leading the way in the women's game so it becomes a bit of a clash of the titans and those are definitely the occasions we all train so hard for.

All three tests were physical, fast and enjoyable to play in, especially finishing at Twickenham after the epic men's victory. That provided a great atmosphere at the stadium when we came out to sing our anthems before the final test. The support throughout the autumn series has been fantastic and seeing women's rugby getting ever increasing recognition it deserves is something to be proud of.

The Monday morning after, came as a huge bump back to reality, going back to work and training in freezing temperatures after two weeks in the rugby bubble with all of my friends. However mid-week became exciting for another aspect of England women's rugby, in that a Sevens Rugby World Cup training squad was named.

I'm really happy to be included in this 17 player squad that comes together weekly from January 2013. It has provided a new and exciting focus and has meant that players can't sit back and enjoy our three wins too much because its already time to start the work hard again, especially after seeing the displays in Dubai by a number of teams, and of course New Zealand coming out on top in that one. The bar is definitely set high for the World Series.

The opportunity for the England Sevens squad to train together weekly is something we all had hoped for and now it's here for us we need to make the most of it in an extremely important six month build up to the 2013 World Cup in Moscow.

So my Christmas needs to be edging towards a conservative one.

There is plenty of training to be done as a different type of fitness is required for Sevens compared to 15's so around enjoying the odd Christmas party I will be working hard with my conditioning to 'hit the ground running' from January 6th when the 17 players have our first weekly camp together.

Its going to be hugely exciting and demanding six months but a programme I'm really happy to have been selected for and looking forward to being involved in.

Between now and then it's back to some frosty Premiership fixtures with all of our clubs!