The qualification process for last year’s World Cup included – for the first time – an African qualifier, with Elgon Cup winners Uganda being given a chance to play for a place in France against South Africa. However for 2017 South Africa will again qualify automatically – a change that threatens the future of women’s test rugby on the continent, says former Ugandan test star Helen Buteme. 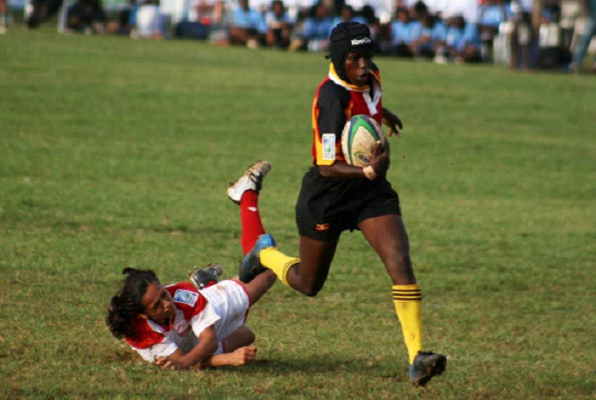 Helen Buteme retired from international rugby last summer, having played for Uganda from their very first test against Rwanda in 2005.

“South Africa are obviously stronger than any other team in Africa at the moment – they won the qualifier against us in 2013 by 63-3 – and so World Rugby and Rugby Africa are saying that the gap is so large that there is no point in having another qualifier.

“But with no chance of qualifying for the WRWC African Unions increasingly do not see the point in having 15-a-side teams as it is more costly to fund them. Although I agree that at the moment South Africa is streets ahead of everyone else, having a 15 aside qualifying competition in Africa would definitely increase the interest in the sport.

Few seem to understand the significance that our game against South Africa had on 15 aside women's rugby in the continent. Yes, Uganda was creamed by SA 63-3 but it was the first time that any African country had played South Africa in 15s and it gave hope. The qualifying process to play in that game itself attracted more attention than ever before. Much larger crowds than usual showed up to watch the women's Elgon cup matches which formed the qualification process. They did so simply because it was a world cup qualifying game.

CAR (as Rugby Africa were then) then did Uganda a great injustice when they made the game against South Africa a one off game in South Africa despite requests from the Uganda Rugby Union to have a home leg. For players, playing away from home is difficult enough but when your chance to qualify for the world cup hinges on one game that is not even in neutral territory against a much more experienced team ... then the game was lost before we even travelled.

Yes, Uganda still would have lost to South Africa but not by such a large margin if the team had belief that there was a home leg to be played or if they had played a home leg prior to the away leg. Playing at home against South Africa would have been a great experience. There were only a handful of fans at the game in a big stadium in South Africa. With a smaller rugby ground, Uganda would have filled it with Ugandan fans (and East Africans), South African expatriates (and people from southern countries who would naturally support South Africa) and rugby fans in general. The atmosphere would have been electric and the game would have been broadcast live on national TV. We lost that opportunity. We also lost a big chance to advertise women's game further and get South African companies on board to sponsor women's rugby.

But despite all these limitations and lost opportunities this first qualifying tournament encouraged other African countries (Zimbabwe, Zambia, Botswana, Namibia, Tunisia – possibly more) to make plans to begin 15 aside women's rugby – Namibia and Botswana even played their first test while the qualification was going on.  Now I hear that all that is now under threat and many programmes may be shelved.

I really hope they are not, but the irony is that by first offering Africa a qualification route to the World Cup and then taking it away again, World Rugby and Rugby Africa may have made things worse than they were before. I know that Uganda is now going to focus on 7s and as a consequence 15s may get dropped completely along the way. With no one to play against, Kenya will inevitably drop their 15s programme – which would end 15s rugby in Africa outside South Africa.

There are a lot of ifs and maybes here, but I have been speaking to administrators and players from a number of countries and the message is the same – why spend money running 15s programmes when there is no chance of ever qualifying for a World Cup, and when even regional tournaments are few and far between. Better to put all the effort into sevens as there is at least a chance of qualifying for a World Cup of even the Olympics. That after all has been the trend in the Caribbean, Asia and Europe – countries that that used to have 15s rugby now only playing 7s - so it is not at all inconceivable.

The real downside of all this is that recruitment of girls and women into rugby in Uganda is actually getting more difficult because of the focus on 7s.  We can no longer say rugby is a game for all shapes, sizes, weights and speeds and thus attract girls and women interested in playing competitive sport but unable to play the traditional women's sports due to them having the "wrong" body type.  The players suited for 15 aside rugby who are already playing rugby are also rapidly losing interest in rugby as they tend to be ignored.  We now have to fight with the more traditional sports for fast, agile players with high endurance levels. Rugby 7s is for a special breed of player - it is not a sport for all.

Fun loving, book worm with a rugby addiction (some call it an obsession).Centre for Uganda, and pretty much any other team who will have her. Never known to attend a tournament (even as a spectator) without bringing some boots - just in case. In her other life, Helen is a tuberculosis immunology research scientist.