Irish fullback Niamh Briggs blogs ahead of this weekend's clash against Scotland, and says there is a spring in her side's step right now. 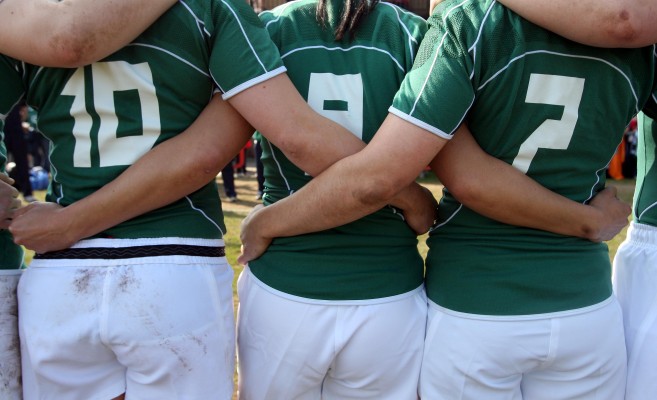 "As we head into the week of our third Six Nations match it's unsurprising that there is a spring in our step as we aim to contest our first Triple Crown this weekend.

Having won our first two matches against Wales and England respectively it sets us up for a massive game against Scotland and while a win would secure us our first Triple Crown ever, more importantly it would guarantee us World Cup Qualification and a seat on the plane to France next year. It has been a whirlwind start this year, and beating Wales away for the first since 2005 and following it up with our first ever victory over England has given us our best ever start to this tournament.  However we know that we are only two matches in and that there is still a long road ahead.

Getting the win away in Wales in the first round gave us a brilliant platform to kick the tournament off.  We knew that it would be a tough physical battle and it was nothing short of what we expected. It was extremely close and we were grateful for our 12-10 win. We defended for large periods of that game and to grind out the result was a massive positive for us. Sometimes it's not about performance and more about results and this was never truer than for this match. This was my first time involved with an Irish side to beat Wales away, and though it wasn't pretty,  it was a victory worth savouring.

The 9th of February 2013 will be a date forever etched in my memory!!

Beating England for the first time in our history was a truly amazing experience. We had dreamed about this for so long and one that won't be forgotten easily; however it's imperative that we do not rest on our laurels and push on from here. It was a tough build up as we had had a very physical encounter against Wales the week before and having not played very well we knew our work was cut out for us against one of the top sides in the world.

But meeting up for the English match there was a good air around the squad thanks to our brilliant management team and we were quietly confident.  The support we had for the match was fantastic as always and from the kick off things just seemed to click.

Getting the result was not only fantastic for us but also for the women's game in general as the win generated a large amount of publicity for us and hopefully this will encourage more girls to get involved.

It was also extra special for the likes of Philip Doyle our Head Coach, Captain Fiona Coghlan, Lynne Cantwell and Joy Neville as they have soldiered for the best part of ten years without even coming close to getting that elusive win against England and I know that this result meant so much to them, and obviously the players from the past.

One of the past greats Fiona Steed was actually commentating on the IRFU Live stream. I must mention that it was brilliant by the IRFU to live stream this game with commentary. My brother Liam who lives in Sydney got see Ireland women play for the first time and I know that a lot of past players who have since emigrated got to witness this piece of history.I have no doubt in my mind that this defeat hurt England enormously but they must be commended on how gracious they were in defeat, none more so than their captain Sarah Hunter who spoke excellently in the post match meal. I have no doubt in my mind they will bounce back for the rest of their matches and show what a good team they are.

Next up for us is an away match versus Scotland this weekend and we are under no illusions about the task that lies ahead. Scotland gave us one of our toughest matches last year and are always very good at home. They are a proud rugby nation and I've no doubt they will be looking to get their campaign back on track and so we will need to be prepared for a battle. But it's a challenge that we will relish.

On a different note I know that I speak on behalf of the whole Irish Squad and management in wishing England player Fiona Pocock a quick and speedy recovery on her injury she sustained during our game.

We all hope to see her back in action in the near future."

Ireland fullback Niamh Briggs is a key player for her country, with her boot and all round game making her one of the top back three players in Europe.  A talented Gaelic footballer with eight All-Ireland medals from underage to senior level with Waterford, Briggs only started playing rugby as a bet with another girl after a summer tag session