Australia women's Sevens captain Rebecca Tavo brings us her latest blog and tells us that injury will see her miss out on the second leg of the IRB Women's World Sevens Series in Houston next month. 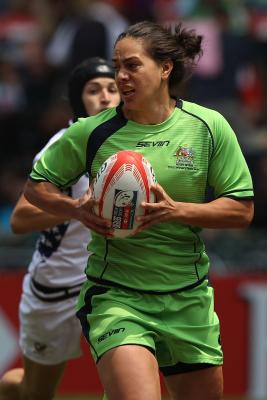 it's been a while since I've shared anything with you and unfortunately I have been rehabbing an injured ankle since Dubai, but am happy to report I'll be back in action soon.

The bad news is the coaches, medical staff and I have decided it's best that I don't play in Houston, but the good news is the ankle has healed well and I'll be available for round three of the IRB Women's Sevens World Series in China in March.

I'm disappointed not to be with the team in Houston next month, but I'm happy with the depth we've been developing in the squad and I really expect some players to make their mark in the U.S.

Dubai was a disappointing tournament for us. Even though I thought we played really well at times, we just didn't have the intensity and go-forward that I have come to expect from our team.

We have the speed and the fitness, but I really feel we need to muscle up a bit more if we're to play the way we want to on the international circuit.

Houston will be a massive test for us as our pool features Russia, who will certainly challenge us physically. That being said, I'm confident in our attacking style and believe players like Sharni Williams and Nikki Etheridge will take charge in USA.

We're still developing a lot of young talent and we need them to start to become leaders. Every time they take the field in international competition they get a little more confidence and our team grows in experience. The more of that we get, the better off we'll be.

So while I am obviously disappointed to be missing out on Houston, I know the silver lining is it provides an opportunity for other players in our squad to gain more experience. They say your team is only as good as its bench and that is especially the case in Sevens, where all 12 players have to contribute throughout the tournament.

Each tournament this year is a stepping stone to the Rugby World Cup Sevens in Russia in June. We're not quite where we want to be yet, but we're building and the most exciting thing is that I know our best is yet to come.