Rebecca Tavo, Captain of Australia's Qantas Women’s Sevens side rues a poor performance in China and looks ahead to an action packed few months. Tavo says the impact of national Talent ID programmes, from which Ellia Green (pictured) has come through, have however been making a big difference. 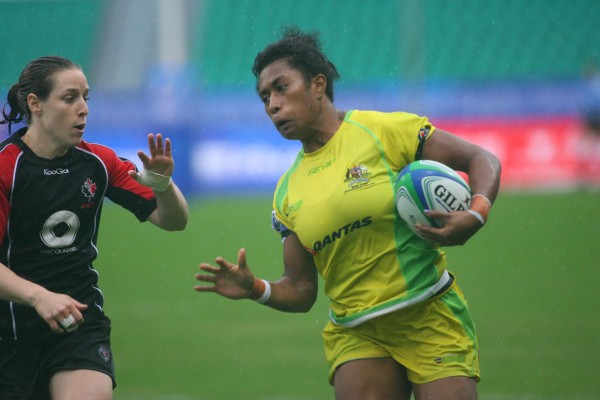 "As Australian representatives, we're obviously not happy with the way we played in China during the third round of the IRB Women's Sevens World Series.

We've said all season that we are a constant work in progress and our results in China proved a couple of things: International Women's Sevens has never been more competitive, and we have a lot of work to do if we want to win the World Cup in June.

While a lot of things could be said about the way we played in China, the truth is we didn't turn up to win. We're all capable of playing at this level and we didn't do the simple things right to beat quality opposition. We'll look at it from a team perspective and an individual perspective. We all need to step up our individual performances and we will in London and Amsterdam!

While I thought we played poorly in China, the competition was outstanding and the international Sevens scene continues to produce strong teams. The super powers in women's Sevens of England, New Zealand and Canada lived up to expectations, but we continue to see new teams impress in their first outings on the circuit. Having been out with injury for a while, I definitely missed seeing impressive players like England’s Heather Fisher and a few of her teammates on the field.

Prior to China, Ireland had played only a handful of Sevens games, but bolstered by much of their Six Nations-winning side, they were able to field a very capable team and upset us 15-14 in the Plate semi-final. They are just one of many nations recognising the exciting opportunity presented to their female athletes following the introduction of Sevens to the Olympics.

The Olympic announcement has had a positive effect in Australia as well, with last year's Pathway to Gold Talent ID camps and the Australian Youth Olympic Festival identifying several exciting young talents to our program.

The hard work behind the scenes is starting to show, as we had four members of our squad in Hong Kong and China come through these programmes. Ellia Green (pictured) and Natasha Haines are both products of the Talent ID camps from last year. Young guns Brooke Anderson and Tiana Penitani were members of the AYOF Sevens team that won Gold in Sydney earlier this year.

Anderson and Penitani's performances on debut were all the more impressive because the girls are still in high school. And there’s plenty of young girls coming through the program that are exciting prospects. Keep an eye out for the likes of Evania Pelite, surely one of many young Aussie talents to watch for. This is a great sign for the future of our program.

There were positives to draw from Hong Kong and China, but there's a lot of things that we will work on between now and the next two tournaments. London and Amsterdam will be massive in terms of preparation for the World Cup and we will keep building on our combinations. China was a good lesson to learn ahead of the June.

It's now less than 100 days to Rugby World Cup Sevens and we've got a lot of work to do. You will see much better performances in London and Amsterdam!"