Australia sit on top of the World Series rankings going into the penultimate round of the tournament this weekend in China. Shannon Parry brings us the latest from inside the camp from Narrabeen, near Sydney, where Australia are now training fulltime together. 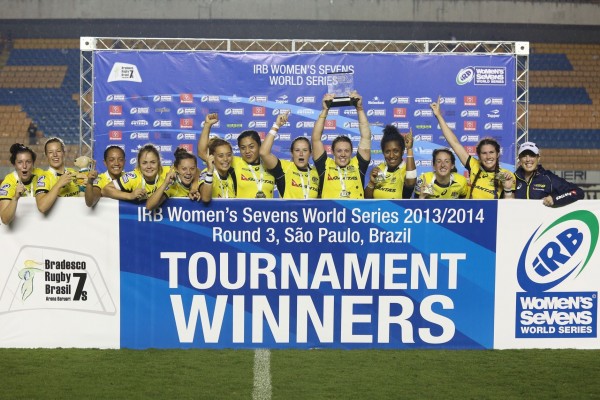 "Wow that month went fast! From Atlanta and São Paulo to our National Sevens Championships and now China awaits!

With Atlanta and São Paulo behind us it was now time to take off the Australian jersey and represent my home state of Queensland along with fellow squad member Emilee Cherry and Charlotte Caslick.

The 2014 National Sevens Championships were held in Canberra with all state and territories represented as well as a National Indigenous team and an Australian Services team. This was a great weekend for all squad players to return and play for their home states.

The weekend was a great success with the quality of rugby shown a lot superior than that of past years. It is great to see the depth of talent that is coming through the women’s Rugby ranks in Australia. Just for the record, Queensland defeated our rivals New South Wales in the final to be crowned National Champions. Proud to be a QUEENSLANDER! :)

After that weekend it was back to the Aussie training field and working on our fundamental skills of the Sevens game. We have had a strong focus on ball possession, execution and maintaining our fitness levels.

Knowing that every other nation is training hard, it has been imperative for us as a squad to not slacken off although we are sitting at the joint top of the table. If anything I think that sitting at the top has brought the squad even tighter together and that desire to win is even greater.

Knowing that it is a hotly contested race to the championship and that their are a number of teams that are in with a chance, we know we must keep pushing the boundaries, to get the best out of each and every one of us.

With the centralisation of our programme and everyone settled in. Narrabeen is like our home now. Competition for places amongst the team is clearly evident on the training field and girls are consistently stepping up to the plate and taking their opportunities. Knowing that each and every member is replaceable, I believe this brings the best out of everyone and makes the team stronger as a whole.

Our preparation for China has been similar to previous tournaments. However, a stronger emphasis has been placed on ball possession, execution as well as the basic fundamentals of the Sevens game. We have identified that these are areas which we need to consistently execute at the top level to win games. These are all basic skills and we know as a team if we can execute these then we will go along way to winning a game of Sevens.

China will see three changes to the squad with two wearing the green and gold jersey for the first time. Nicole Beck makes her return from the 2009 World Cup winning side after a stand out performance for New South Wales at the National Sevens Championships.

She has been working consistently hard at training too and has been rewarded. Gemma Etheridge will make her long awaited return from injury and the other change to our team sees the inclusion of Kirby Sefo who will be making her IRB Series debut, Kirby will bring added strength to the forward pack. All of the girls have been training hard and can't wait to take on the challenge of China next week.

So until next time :)