Canada on top in North America

Canada won the 2017 Can-Am Series title after a 37-10 win over USA Saturday afternoon at the Chula Vista Elite Athlete Training Centre in San Diego, California. After also winning the first test 39-5 on Tuesday. 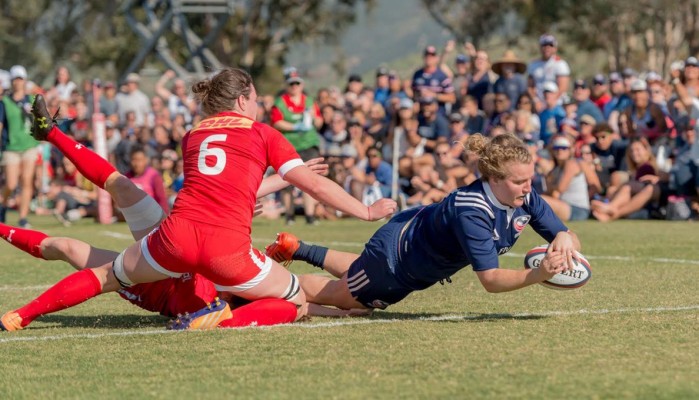 The result is the latest indication that power in North America has gone north of the border. The two teams have been playing each other since 1987 in a series that the USA originally dominated, winning the first nine tests. But now – for the first time - Canada have pulled level at 18 games all, after winning six of the last eight games.

A standing-room-only crowd welcomed the players of both teams, but it was Canada who started the stronger, controlling the pace of play for the entire first half while dominating the scrum.

Again Canada had the scoreboard moving early on when captain Kelly Russell scored the after the No. 8 picked the ball from the back of the scrum and powered over to give Canada an early 7-0 lead. The scrum was also the foundation of the next try minutes later, the ball finding its way to Julianna Zussman scoring wide on an overlap, 12-0. With Magali Harvey adding a third Canada were up 17-0 at the break.

It was an impressive opening 40 minutes for the Canadians, who held 65 percent of the possession.

“The collective understanding of the movement is understood and our scrum is powerful,” said head coach Francois Ratier.

Canada did not have things entirely their own way, with Alev Kelter in particular was everywhere, and the speed of fellow sevens star Naya Tapper a constant threat. And it was Tapper who was on hand to pull a try back for the USA soon after the break. Harvey replied with a penalty for Canada, but with Kelter setting up a move that lead to a second American try from Catherine Benson shortly afterwards, the USA were back within 10 points at 20-10.

"We changed a few things around how we do half time because of our poor start on Tuesday," Steinberg said. "They stepped up and I think we had some opportunities at 20-10. If we had just been able to execute it would've given us the belief that we could actually win. But Canada's savvy, experienced, and took advantage of the opportunities they were given.

That was the high water mark for the home team, however, as four minutes later Emily Belchos placed a perfect grubber to find Elissa Alarie racing down the wing for another Canadian try.

Finally Harvey added her second try of the match to finish with 17 points in the game, and Canada were 37-10 winners.

"Although I'm disappointed we didn't give a little bit more in the first half, I was very proud of how our defense held a strong Canadian team," Steinberg said. "We made 60 tackles in the first half alone. We were still playing well into the final stages of the game before the yellow card.

"I walk away from the Series excited about the potential of this team but also challenged by the work it's going to take to fulfill that potential by August. We're going to find time to get these players together. It's hard to become a better scrummager without actually scrumming in an international match, but we got better this week."