France shocked England with an 18-6 win at home in the opening round of the 6 Nations. 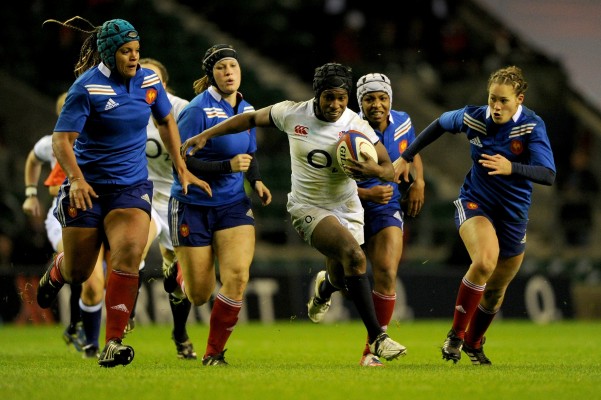 France played to their strenghts brilliantly, being led strongly by Gaelle Mignot, the hooker who crashed over for two second half tries, both coming from driving mauls which England had huge difficulty defending all night.

The hosts also kept it tight all night, domianting the set piece and the breakdown and nullifying England's backrow threat. Also impressive was the ferocious French defence with Marjorie Mayans in the centre typifying a top effort with one huge hit on Maggie Alphonsi in the midfield.

The result also changes the outlook on this year's tournament where a full strength England were expected to be the key threat, despite Ireland's massive progress.

The home side started strongly with some solid driving work up front getting them decent territory and experienced back Sandrine Agricole also chipping in with some fine positional kicks.

A tap and go from Natasha Hunt was England’s best piece of attack in the opening ten minutes but it was through Katy Mclean’s boot the first score came with a simple penalty ager 12 minutes.

Agricole levelled it up minutes later with a superb drop goal after a well organised maul in the 22 and France continued to pile the pressure on, forcing England back to their own try line twice in the next ten minutes with Safi N’Dyiae and Assa Koita getting through lots of work in the tight exchanges.

England’s defence though was immense, with Tamara Taylor, Maggie Alphonsi and Rachael Burford putting in vital hits as they were forced backwards and finally Emily Scarratt was put into space to race out of the England 22 and help her side eventually to a penalty which Mclean gratefully booted over for the lead.

Indeed England could have had more had  Marion Lievre not put in a huge tackle on Alphonsi from the counter attack, but England would have been pleased to sneak ahead with the hosts looking very strong.

Agricole drew the sides level again before halftime when her side continued to pile the pressure on at the breakdown, while France were also getting on top in the scrum with a series of excellent shoves.

England ended the half on the attack with a nicely worked maul of their own but France held out for a 6-6 score at the break.

France came firing out of the blocks in the second half with Assa Koita putting some charging runs in and Agricole did have an early chance for the lead with a kick but missed.

Finally though the French driving line out paid scoring dividends with a brilliantly organised shove from 10 metres out alloying Gaelle Mignot to get over the line.

England had chances of their own to kick points minutes later but turned the chances down to go for the corner. They came close, but a knock on relieved the pressure on the hosts as England just couldn’t find the final pass.

The French defence was excellent as England pressed, summed up by Mayans who knocked Alphonsi back off her feet and forcing a penalty, a rare sight indeed.

France continued to put the squeeze on up front, with Mignot working really hard to motivate her side as they worked hard at the breakdown.

The arrival of Victoria Fleetwood gave England some help at the scrum as she worked hard to turn the ball over against the head but it was only a short reprieve.

France rolled over for another excellent try from the inspirational Mignot again - in a carbon copy replica of their first with a driving maul from metres out causing England all sorts of problems in defence.

The conversion from Tremouliere was good from the corner and France stretched their lead to an 18-6 lead with the hosts holding out for a fantastic win.