Japan could be testing opposition in August as again the pushed an Ireland XV hard in the second unofficial international today. 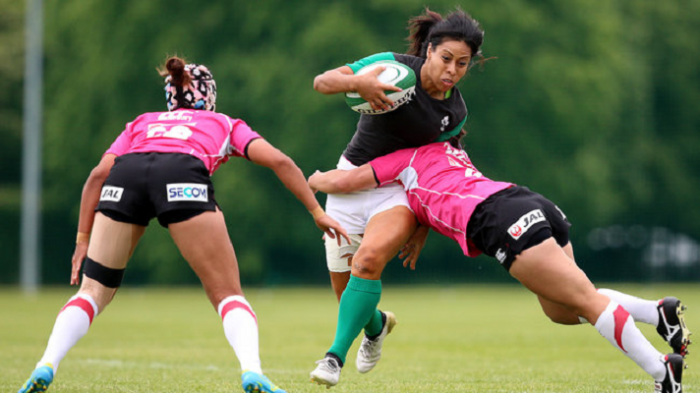 Report from IRFU. Second half tries from Claire Molloy and Ailsa Hughes saw the Ireland Women's XV make it two wins out of two in their uncapped trial match series with Japan. Tom Tierney's side triumphed 24-15 at Billings Park in UCD this afternoon.

Having touched down twice against Japan in last Saturday's opener, Claire Molloy was an influential figure again for Ireland. Her 69th minute try today moved the hosts back into the ascendancy after a strong third quarter from Japan, and replacement Ailsa Hughes' well-taken score subsequently made sure of the result.

Molloy, Sene Naoupu, Eimear Considine and Cliodhna Moloney were the only players to retain their starting places from the first trial game, and while playing on the Billings Park pitch poses a different challenge to the more familiar UCD Bowl, Ireland nevertheless hit the ground running with an early seven-pointer.

The Irish pack, which had Leah Lyons at tighthead and Heather O'Brien at number 8, pushed towards the whitewash on the left flank and openside Molloy showed impressive speed and strength to reach over for a third minute try. Out-half Nikki Caughey comfortably knocked over the conversion, but Japan responded in emphatic style.

Winger Honoka Tsutsumi almost broke free out wide on the left, and after the ball was recycled into a more central position, out-half Chikami Inoue was on hand to cross the whitewash under severe pressure from the Irish defence.

Full-back Mayu Shimizu was wide of the mark with her subsequent conversion, though, as Ireland held onto a slender lead - 7-5. Indeed, once they regained possession in the Japanese half, the home side started to develop further attacking momentum.

Winger Considine posed a significant attacking threat and when she latched onto a loose ball inside the Japanese 22 in the 12th minute, the UL Bohemians back duly notched Ireland's second try of the day. Caughey missed the conversion and in spite of the first quarter's frantic pace, the 12-5 scoreline stayed in place for the remainder of the opening half.

Paula Fitzpatrick and Ciara O'Connor were both brought on before the break, with O'Brien (temporarily) and Lyons forced off through injury. Both coaches were able to make a succession of substitutions, giving game-time to as many players as possible with the Women's Rugby World Cup looming large on the horizon.

In a similar vein to last Saturday, it was Japan who initially dominated when play resumed. The elusive Tsutsumi showed herself to be an effective carrier and she exploited a gap in the home defence for a 46th-minute unconverted try.

As the second half wore on, Ireland started to settle into a more familiar rhythm, but they fell 15-12 behind just past the hour mark. Their World Cup pool rivals turned down a shot at the posts from 25 metres out and the decision paid off as replacement Chihiro Kobayashi scored from the rear of a powerful lineout maul.

Another missed conversion did let Ireland off the hook to a certain extent, but with experienced Old Belvedere pair Nora Stapleton and Sophie Spence having the desired impact off the bench, Ireland did not have to wait long for their own third try.

Spence almost added her name to the scoresheet with an incisive drive, before the in-form Molloy managed to crash over for her fourth try in the space of five days. Then, following a neat offload by Spence, Railway Union's Hughes sprinted in under the posts for a clinching 75th-minute try.

Stapleton added the extras to open up a nine-point advantage, and after a Japanese player went down with what looked like a serious leg injury - she was taken away in an ambulance - with 80 minutes almost on the clock, a decision was made to bring this second trial game to a close.