After three defeats in three years, Wales turned the tide at the Stadio Comunale Pacifico, in Iesi, to win by 20-8. 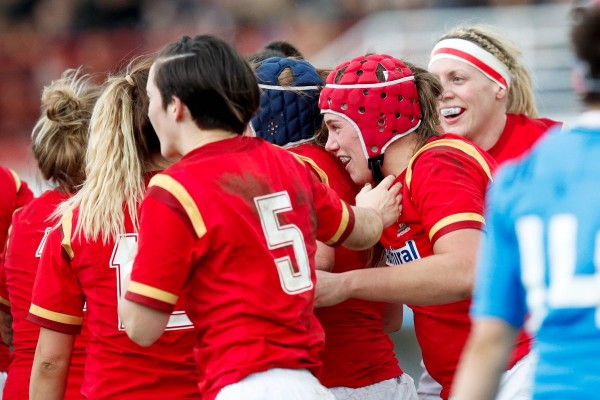 Welsh preparations before their opening Six Nations game were in marked contrast to Italy. Four games, with four wins, since November had not only given them practice but also the confidence that comes from winning. Italy, on the other hand, had not played since the teams last met in Neath last year.

That preparation contributed to a bright start by the Welsh team. On a blustery day Wales began strongly, picking up early points after Italy were penalised in the scrum, Snowsill converting the penalty. Shortly afterwards another Italian scrum infringement gave Wales a free kick inside the Italian 22., after which series of series of quick pick-and-goes put Caryl Thomas in under the posts.

As the wind now shifted so do the game, Italy rediscovered their game. First a Michela Sillari penalty put them on the board, before some quick hands, and a great pass out of the tackle on the touchline by Sillari, put Manuela Furlan in for Italy’s try. But with the conversion missed Wales still lead, 10-8, at half-time.

Five minutes into the second half a series of Welsh mauls sucked in the Italian defence, creating a huge overlap on the left where the ball soon found Dyddgu Hywel, and Wales’ second try, and a 15-8 Welsh lead.

A long period of Italian pressure then followed, with the game stuck inside the Welsh 22 for over 10 minutes, but without any reward for the home team.

Entering the final quarter a mix up over a Welsh kick ahead between Furlan and Sillari gave Wales a lineout inside the Italian 22. Italy had no response to the resulting driving maul, and Carys Phillips was on hand to get the touch, putting Wales 20-8 ahead.

Quick thinking from Italian captain Sara Barattin, quickly running a penalty, put Italy back inside Welsh 22, but robust Welsh defence held out again, surviving a charge down on their own line. Wave after wave of Italian attacks broke on the Welsh line, but could find no way through.

So Wales began their Six Nations with a win – their fifth in a row under their new coach. It seems to be becoming a habit.

Replacements used: Moore for Bevan 55, Butchers for S.Harries 67, Lillicrap for Rowe 67, Kavanagh-Williams for Taviner 72, Hale for Thomas 75, Pyrs for A.Evans 75, Rowland for Lake 75, L.Harries for Phillips 75.