The reality of trying to fit a quart into a pint pot will see most of the key games on Day Two at the Sydney Sevens taking place in a 600-seat training field, with no permanent facilities, according to the Sydney Morning Herald. 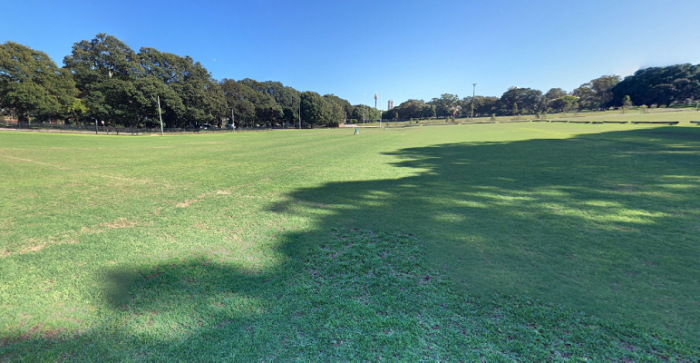 Kippax Training Field - where most of the knockout games at the Sydney Sevens will be played.

Double-headers in World Sevens has been promoted as the way to go, with the Australia Rugby Union determined to showcase their gold medal winners at the Sydney Sevens.

However, as Georgina Robinson reported yesterday, the best laid plans of the ARU have gone seriously astray – mainly, it would seem, due to the intransigence of the men’s circuit.

First, ARU plans to schedule both tournaments over three days bit the dust when “player welfare” concerns were raised, due to Sydney following directly on from the men's world series in Wellington this weekend – raising the interesting question of how reducing the number of games players would play on a single day increases welfare problems.

That should still not have prevented say the women’s quarter finals taking place in the main stadium, even if some of the men’s lower-ranked pool games had to move elsewhere. But No

“A World Rugby spokesman said the women were moved off the main pitch because of ‘commercial arrangements’, Robinson says. “It is understood Sydney's deal to host the men's tournament, which was signed a year earlier than the women's, stipulated that all games be played on the Allianz Stadium turf.”

So, some of Australia’s most feted, most high-profile female athletes– the ARU’s  "rugby pioneers"  - will now be playing in crucial knock-out matches at the Kippax Training Field, which, as its name suggests is indeed a field (see above). It has no permanent facilities and will (at best) seat only 600 people in temporary stands, with maybe room for 400 more to stand. Meanwhile 45,000 Australia rugby fans will be presented with far less well known (male) players competing in their early tournament pool games. It is even possible, should Australia lose their quarter-final (not by any means impossible), they could well not play in the main stadium at all.

Only six of the second day games will be played in the main stadium – including the semi-finals and final – utilising the existing gaps in the men’s schedule. Or, to put it another way, the men’s tournament has not given an inch to accommodate the women’s - despite both being run by World Rugby.

It can hardly be what the ARU or the Australian team’s supporters wanted or expected for this historic event. Moreover, the same problem is likely to be repeated at any future double-header events unless World Rugby steps in.

After all, World Rugby control both the men’s and women’s events, World Rugby make these restrictive contracts, so if World Rugby wanted to find a solution they could.