We look ahead to all of the playoff games at the World Cup. 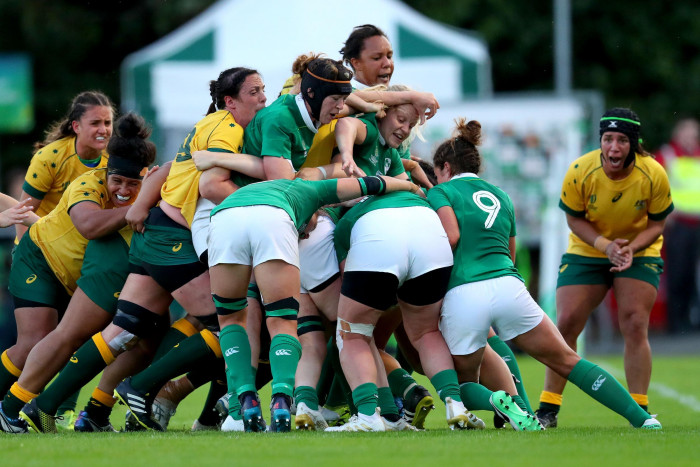 The 5th place semi-finals are repeats of pool games from only a week or so ago, so we have a good idea about what to expect.

The games should be important for automatic qualification for the 2021 World Cup, but as World Rugby have not said what the criteria will be it’ll be hard for teams to be motivated by this, especially when the criteria in recent World Cups has been wildly unpredictable and decided in retrospect.

Certainly the selection of the semi-finalists in 2010, but the top seven after 2014, raises suspicions that it is based on the formula “Australia and whoever finished head of them”, perhaps fearing that the ARU might not enter otherwise.

Ireland v Australia (2pm). Moved to the Kingspan as a sort of horderves for the semi-finals that follow, if the first game is anything to go by it’ll be a cracker, and well worth getting to the stadium early for.

The only real change may be a mental one, and that possibly favours Australia. Both teams will be deeply disappointed about missing out on the semi-finals, but while memories of their loss to France and a mauling (which is still on-going) in the local press will be fresh for Ireland, Australia have at least had a confidence boosting win over the difficult Japanese since they were taken to the cleaners even more decisively by the same French team.

In the end, this may simply come down to the question of who wants it most.

Canada v Wales (5pm).  Without knowing the likely crowds at Queens University, it hard to predict what the atmosphere at the ground will be, but while Wales expected to be here, the atmosphere in the Canadian camp is unlikely to be as positive after being so heavily outclassed by the Ferns on Thursday.

That said, Canada will expect to win this game and will hope to put in a better performance than they did a week ago, when their failure to pick up a try bonus point was the first sign of problems. Indeed, Wales at times looked like they could have stolen that game. A score in the first half might have given a very different result.

If there is any pressure in this game, it will be on Canada but it is hard to see them putting as poor a performance as last week. Indeed, with the pressure released they may relax and show what they are capable of.

This Asia vs Europe mini-series is, in many ways, far more interesting that the higher profile 5th place series that ranks above it. These four teams – physically the four lightest and (Italy aside) smallest teams in the tournament – are quite well matched and who is likely to come out on top is quite hard to spot.

We certainly got a taste of what could be on offer with the very enjoyable Italy v Spain pool game last week, and if that is any indicator we are promised some very entertaining rugby from these four teams and we can but hope that spectators will come along to Queens and make the most of it before wandering along to the Kingspan for the big games later in the day.

Italy v Japan (Noon). These two teams have met once before – at the 2002 World Cup, where Italy won 30-3. This one will be rather closer than that.

After their French lesson on day one, the Japanese have been getting better and better, leading Ireland 14-0 at half-time before losing 24-14, and giving Australia a lot to think about before going down just 29-15. Italy do no offer anything like the threat of these opponents, and there has to be a real chance that Japan could pull off a win in this game.

Italy – clearly not aided by the lack of warm-up fixtures (Cristina Tonna’s pre-tournament defence of this seems even thinner now than it did in June) – have been very disappointing, and if they have been reading comments about their performances on Italian rugby websites it will not have been pleasant experience. The heights they achieved in the 2015 and 2016 Six Nations now seem a long way away, and faced with the buzzing, inventive, Japanese they are likely to become first European team to lose to Asian opposition in the World Cup since Japan beat the Netherlands in 2002.

Italy should have an advantage up front, but even that is not guaranteed. As Ireland discovered, the Japanese pack may be small but they are powerful.

It will be a close game nonetheless, but Japan will be looking forward to this much more than the Italians.

Spain v Hong Kong (2.30pm). Hong Kong – with the memory of leading against Wales, even if only for three minutes, fresh in the mind – will be “up” for this game, but they are also up against not only a Spanish team with their tails up having beaten Italy, but also the one European team that knows them best.

Hong Kong have played Spain four times in the past two years, with two of the games being tests. Those Spanish teams may have lacked their sevens players, but they had no problems beating Hong Kong comfortably on all four occasions.

It is hard to see that not happening again. Although disappointed at missing out on the 5th place playoffs (where they would have been far from disgraced), Spain will be highly motivated and will want to retain their 9th place from 2014, and this game should see them take a firm step in that direction.