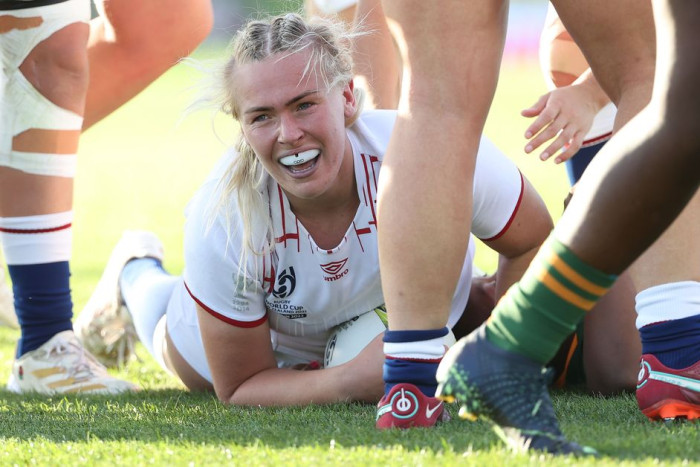 Australia battled hard to defeat Wales 13-7 and secure their quarter-final spot at Rugby World Cup 2021. They led 10-7 at the interval and, after dominating possession in the second period, a penalty with three minutes to go made sure of the victory at the Northland Events Centre in Whangārei.

Given that this was a match between seventh and ninth in the World Rugby Women’s Rankings it was always going to be a tight affair. Australia started the stronger and they took the lead after just five minutes through scrum-half Iliseva Batibasaga and when full-back Lori Cramer converted it was 7-0.

That was the way it stayed until the 24th minute when Wales hit back through a try from number eight Sioned Harries. It was converted by fly-half Elinor Snowsill and things were level at 7-7.

Just before half-time, Cramer kicked a penalty to give Australia a crucial 10-7 lead at the interval.

As the game headed towards the hour mark, Australia remained the team on the front foot and with the territory, but often when they tried to string phases together there was a handling error which stopped things in their track. By the 65th minute Wales had made more than 200 tackles, but they were staying in the fight and frustrating Australia with consistently good defence.

Despite Australia replacement Kaitlan Leaney receiving yellow card for a high tackle Wales could not capitalise and, eight minutes into the 10-minute sin-binning period, Australia scored from a penalty.

New Zealand made sure that they will head into the 2021 quarter-finals as number 1 seeds as they scored seven tries to win 57-0.

The first try of the match came within two minutes, a speedy start from New Zealand seeing full-back Renee Holmes going over for five points. She could not convert it herself, but it was the perfect start for the hosts. Try number two came in the 10th minute through winger Ayesha Leti-l'iga and, just two minutes later, flanker Sarah Hirini went over. Holmes converted Hirini’s effort and it was 17-0.

Scotland were struggling to cope with the offloading game coming from their opponents and the bonus-point fourth try came in the 17th minute for New Zealand via number eight Liana Mikaele-Tu'u. Holmes converted.

Centre Theresa Fitzpatrick showed great handling skills while she was being tackled to dot down for try number five just after the half-hour mark which Holmes converted.

And New Zealand made it six tries when fly-half Hazel Tubic set-up winger Renee Wickliffe who finished well. The scoring pass by Tubic was checked for a potential forward pass, but referee Aurelie Groizeleau declared it was fine and the conversion by Holmes made it 38-0.

There was still time for a seventh New Zealand try before half-time, Wickcliffe getting her second with Holmes converting to make it 45-0 after 40 minutes.

New Zealand showed how clinical they can be by scoring try number eight with their first attack of the half. It came through second-row Maiakawanakaulani Roos in the 52nd minute and was converted by Holmes as New Zealand went through 50 points.

Scotland kept on battling, though, and due to New Zealand being under a bit of pressure, their replacement tight-head prop Tanya Kalounivale was yellow carded with 15 minutes to go. Just before New Zealand were back to 15 players they managed to score their ninth try, an unconverted one this time by Holmes who now had 22 points to her name.

France ran in seven tries in Whangārei to secure a 44-0 victory against Fiji that sends them into the Rugby World Cup 2021 quarter-finals as at least fourth seeds.

It was Les Bleues who controlled proceedings virtually from the first whistle, however, as they built a three-try 20-0 lead by half-time and made sure of a try-scoring bonus-point midway through the second half when Maëlle Filopon crossed the line for the second time and added another three tries to see out a comfortable victory.

Afterwards loose-head prop Silvia Turani said: “A win is a win and the most important thing here is that we responded to things within the game and found a way to get the victory. It means a lot for us to get through to the quarter-finals and we want to inspire people back home in our country.”

It was Italy who took the lead in the ninth minute when winger Maria Magatti went over for the opening try. Centre Michela Sillari could not convert and it was 5-0. Any thoughts that that score would open the floodgates proved unfounded as Japan gave as good as they got. And it was the Sakura Fifteen who scored the next points on the half-hour mark, flanker Kyoko Hosokawa levelling things at 5-5.

Three minutes before half-time Italy regained the lead when a Sillari penalty gave them a slender 8-5 advantage at the break.

Into the second half Otsuka levelled things up with a 49th minute penalty.

From 8-8, Italy knew they needed a big last half hour to keep their hopes of progressing alive and, although they never quite hit top form in the face of good defence by Japan, they did enough to get the win. Sillari kicked a second penalty of the day in the 55th minute and then, eight minutes later, Japan were reduced to 14 players when Winger Komachi Imakugi was yellow-carded

While she was off the pitch, Sillari kicked a third penalty and then, with Japan back to 15 players, Italy made sure of the victory when hooker Melissa Bettoni went over for a try. Sillari converted with 60 seconds left on the clock as it finished 21-8.

Canada reached quarter-finals with maximum points from the pool phase by defeating USA 29-14. USA, ranked seventh in the world, finished third in the pool and also go through to the last eight and will have taken heart from part of their performance too.

Canada got off to a flying start and they took the lead thanks to a try from an attacking lineout. Hooker Emily Tuttosi was the scorer, her sixth of an amazing tournament so far, and although captain Sophie De Goede missed the conversion they were 5-0 up after six minutes.

Things got even better for them 10 minutes later when fly-half Alex Tessier went over for try number two and this time De Goede did add the extras and they were in the driving seat at 12-0 to the good.

USA are made of stern stuff, though, and their centre Alev Kelter is certainly a tough cookie. In the 21st minute she injected some momentum into her side's performance by scoring a try and converting it.

Three minutes before half-time Canada scored an important third try. It came through winger Paige Farries and, with De Goede converting, it was 19-7 to them with 40 minutes remaining.

Canada managed to ride out that period of pressure early in the second half and got back down the other end of the pitch to bag their bonus-point fourth try on the hour mark after a kick and chase from centre Alysha Corrigan won a penalty and, from the resultant lineout, replacement front-row Olivia DeMerchant went over. De Goede’s conversion attempt hit the bar, but her side were 24-7 up.

A try by USA’s impressive captain Kate Zackary in the 71st minute – converted by Kelter – brought them back within 10 points but with a minute remaining number eight Zackary was yellow-carded and Canada took advantage to put the cherry on top of their cake with try number five from replacement front-row Mikiela Nelson.

Rosie Galligan and Connie Powell scored hat-tricks as England marched into the quarter-finals as third seeds after a big 75-0 win over South Africa, taking their winning run to 27 matches.

The dominant English pack accounted for all bar one of their tries, with Poppy Cleall and replacement flanker Sadia Kabeya both bagging a brace of tries apiece and Marlie Packer dotting down in her first test as Red Roses captain. Had Galligan not had a fourth try disallowed late on and 16 points not gone begging through missed conversions, England would have surpassed the record 84 points they put on Fiji in their opening fixture.

Despite going into the match as overwhelming underdogs, South Africa started brightly with ever-impressive number eight Aseza Hele and winger Nomawethu Mabenge making penetrating runs inside the England 22. But it was England who scored first when Galligan called an attacking lineout to herself and dotted down from a rolling maul in the sixth minute.

Catha Jacobs was sin-binned for a dangerous tackle on Cleall but the ‘boks survived being a player down, but  after that it was all England. Galligan got her second approaching the half-hour mark before tries from Shaunagh Brown and fellow front-row Connie Powell – and a second yellow card to captain Nolusindiso Booi – added to South Africa’s woes.

England turned around 29-0 up and wasted no time in turning the screw further, Powell getting her second within a minute of the restart before nice interplay with Cleall saw Packer go over on 51 minutes. Centre Tatyana Heard had a hand in the next three tries in an impressive showing in midfield as Galligan’s hat-trick was followed up by a second for Cleall and the first of Kabeya’s two tries.

Winger Abby Dow finally broke the forwards’ monopoly on scoring in the 64th minute when she crossed in acres of space out wide for her 24th try in 27 tests. But normal service soon resumed with Powell claiming her hat-trick and Kabeya getting another from close range.

Sarah Bern’s yellow card for a dangerous tackle in the final minute was the only blemish for an England team that will take some stopping, particularly upfront.